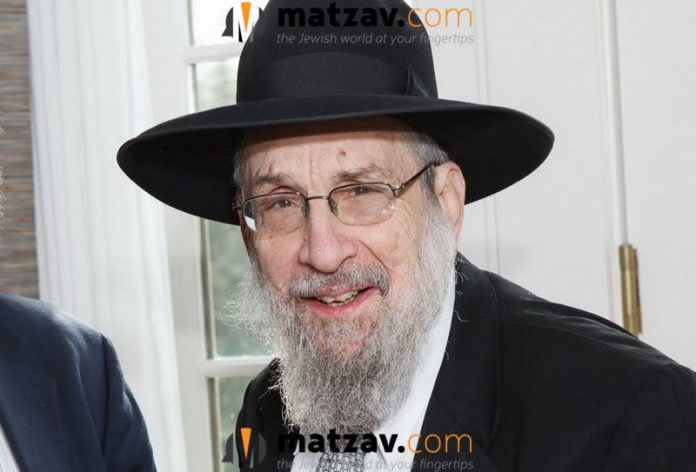 It is with great sadness that Matzav.com reports that passing of Rabbi Yecheskel Kaminsky z”l of Far Rockaway. He was in his 70s.

A Chicago native, R’ Yecheskel was a talmid at Telshe Yeshiva in Cleveland before learning at Bais Medrash Govoah in Lakewood. He resided on Reads Lane in Far Rockaway, NY.

In 1979, Rabbi Kaminsky left his position as assistant executive director at Mesivta of Long Beach, NY, to pursue a very different career, that of selling seforim. He even entertained working in real estate before plunging into retail book selling, choosing to purchase Minzer’s Judaica Store, a small, understated storefront at 1847 Mott Avenue in Far Rockaway.

There were only a few local Jewish stores – a bakery, a pizza shop, and a grocery store. From its inception, Kitov Hebrew Books played a vital role in the growth of Far Rockaway and the Five Towns through its efficient and reliable delivery of much-needed seforim to the yeshivos and Bais Yaakov schools emerging to serve the population expansion.

Throughout, Rabbi Kaminsky kept things warm and personal, avoiding computerization partially because so much of his business was based on his unique brand of integrity upon which so many yeshivos had come to rely.

And then there was the other reason for his avoidance of computers, something that was an absolute truth for those who bought seforim from Kitov books: First and foremost, Rabbi Kaminsky was always a people person with a magnanimous heart.

After he closed the store, he commented on what missed the most: “One of the things I miss most is the interactions with bochurim and rabbeim. I got a call from a bochur from Yeshiva Sh’or Yoshuv. He asked me if I could help him out, because he needed an out-of-print set of seforim, and I was able to find it for him. I felt so good about helping him and suggested that we might learn together. I miss the shaychus with bochurim and rabbeim.”

Rabbi Kaminsky admitted that the secret to his many years of success was not based on the fact that his seforim were the cheapest on the market.

Even as the nature of Far Rockaway changed and Rabbi Kaminsky was encouraged to change locations, he stayed put.

Although Kitov Books opened bright and early every day, Rabbi Kaminsky arrived at the store later in the morning after learning with his chavrusah.

In May 2014, after 35 years, R’ Yecheskel shuttered the doors to Kitov Hebrew Books, bringing a poignant close to a chapter in the history of the Far Rockaway Jewish community.

After he closed the store, he kept his chavrusahshaft with Reb Aharon Mandelbaum, with whom he finished Shas, and added afternoon and night sedorim as well.

Additionally, with more time on his hands, Rabbi Kaminsky pushed himself to use the extra hours of his day to extend Hashem’s kindness in the world.

“Chesed is not only to give three million for a school,” Rabbi Kaminsky once said. “Everyone has to do chesed in each community. There is the Shabbos Project, inviting a kid at risk for a Shabbos seudah, or visiting a shut-in. As Rav Moshe Feinstein zt”l said, ‘Just as there is maaser on money, there is maaser on time.’”

After Rabbi Kaminsky closed his store, someone went to him with a gift certificate he never redeemed. Rabbi Kaminsky found him something in his garage. That was the type of person he was.

Rabbi Kaminsky once remarked that very few people are zocheh to close a business like his did. It was a financially smooth closing and everybody got paid. “It’s such a big thing, when you close a business, that everyone gets paid. I have great hakoras hatov,” he said.

“Two days before the end of the store’s final sale, a long-haired kid came in and bought sixty-five dollars worth of seforim,” Rabbi Kaminsky related. “He said he couldn’t pay me right away. I told him to take the seforim; I always trusted people. I found out later that he sleeps in a car. I was mochel him. That’s how we ended the business.”

Rabbi Kaminsky once reflected that when he opened his store, he didn’t know what he was getting himself into. I had thought about getting into real estate, but only seforim gave me a geshmak. I was happy doing what I did, and now I am learning, doing chesed, and working on shidduchim. I am the happiest person in the world.”

Soft-spoken, friendly, ehrlich and kind, Rabbi Kaminsky, who lived a life of Torah and avodah, will be sorely missed by all who were privileged to know him.

The levayah was held today at Yeshiva Darchei Torah in Far Rockaway. Kevurah will take place in Lakewood, NJ, at the bais hachaim located adjacent to the Congregation Sons of Israel Holocaust Memorial Chapel, located at 613 Ramsey Street, off of East 7th Street.

Rabbi Kaminsky is survived by his wife, Mrs. Chana Kaminsky, and their wonderful family.