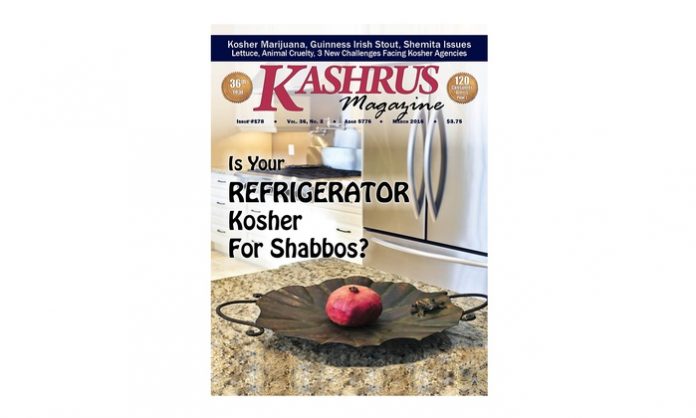 KASHRUS Magazine, the Brooklyn-based periodical for the kosher consumer, has chosen Rabbi Yisroel Gildin of Kof-K Kosher Supervision (Teaneck, NJ) as their 7th annual “Mashgiach of the Year” and presented him with a check for $1,000. The presentation was made on November 15 at Kosherfest, the world’s largest trade show for the kosher industry.

KASHRUS Magazine’s December/January issue will feature a full interview with Rabbi Blum. He will also be interviewed onKashrus Magazine’s weekly radio show, Kashrus on the Air, on Monday, November 27. (The interview can be accessed live or archived at www.JRootRadio.com or 718-506-9099, option 3, and then option 3.)

Rabbi Yisroel Gildin was chosen from among the nominees of the 1,396 kosher agencies worldwide. He has worked for theKOF-K Kosher Certification for 20 years and served as the mashgiach at Givaudan for the last 18 years. He supervises the kosher aspect at the New Jersey facility as well as reviewing formulas for most of their 8 locations.

Rabbi Gildin is equally conversant with the highly technical aspects of flavor production as well as the methods of kosherization of the various equipment. Aside for his long hours at the plant, Rabbi Gildin is on call to handle a situation which may arise necessitating a rabbi to be on site. He always appears with the quiet demeanor and pleasant countenance so important for a kosher supervisor.

The sponsors of the “Mashgiach of the Year” Award were Diversified Communications, the producers of Kosherfest; Costa Rica Kosher Adventures (www.costaricakosheradventures.com); and Kosher Vitamin Express (www.koshervitamins.com).

“A mashgiach is not a policeman,” said Rabbi Yosef Wikler, editor of Kashrus Magazine, “rather, he is the represe ntative of kosher and Judaism to the staff in his facility and to the administration of the company he works for. Rabbi Yisroel Gildin, through his winning personality and firm resolve, wins daily the hearts and cooperation of the entire staff at Givaudan, and at KOF-K Kosher, truly deserving the title ‘Mashgiach of the Year.’”

KASHRUS Magazine’s December/January issue will feature an interview with the “Mashgiach of the Year.” To receive a free copy of that 6-page interview and report, email KASHRUS Magazine at [email protected], send a self-addressed, stamped envelope to KASHRUS, Mashgiach Award, POB 204, Brooklyn, NY 11204, or call 718-336-8544.