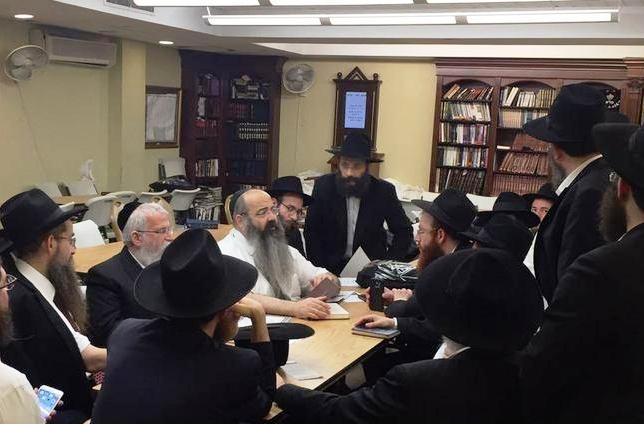 A group of Lubavitchers from across the world spent long hours this past month to prepare for a test that would help them become recognized by the Israel’s Chief Rabbinate.

“The fate of the Jewish future lies in your hands,” stated Rabbi Yochanan Gurary, Chief Rabbi of the Israeli city of Cholon and a member of the Chabad Rabbinical Court of Israel.

“Future generations will be relying on the documents that you fill today to verify who is Jewish, who is a Kohen or a Levi,” he said in his opening remarks on Friday. “That is why Israel’s Rabbinate takes extra caution with such matters.”

His colleague from Cholon, Rabbi Pinchos Althaus. explained that since religious affairs in Israel are government controlled, the bureaucratic process is often as complex as halacha itself.

Evidence of that was the recent drama over conversions to Judaism performed by Rabbi Haskel Lookstein, the long-time spiritual leader of Congregation Kehilath Jeshurun in Manhattan.

The case made headlines after one of his converts was rejected in Israel, which implied that Rabbi Lookstein’s conversion of New York entrepreneur Ivanka Trump would also be invalid in Israel.

Speaking to the young rabbis, Rabbi Althaus said the source of the decision was the division of powers with the rabbinate itself, between the Chief Rabbis and the Beis Din that advises them.

The goal of the Kiddushin course, offered by Vaad Rabbonei Lubavitch – Central Committee of Chabad-Lubavitch Rabbis in the United States and Canada, was to have to have weddings performed by Chabad rabbis recognized in Israel.

Those who passed the test would also be accredited to officiate weddings in Israel for their community members from abroad, he said.

Report and photos by COLLIVE.COM.