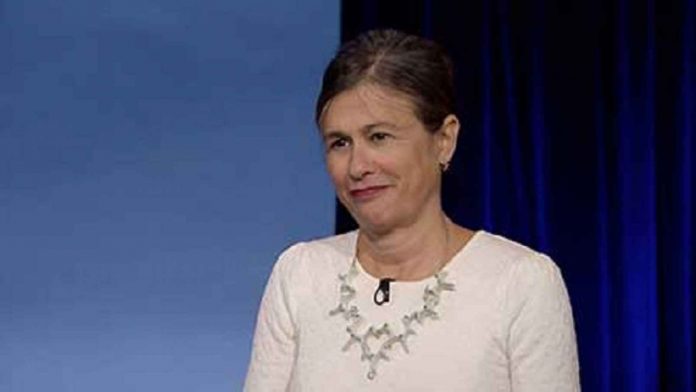 Burleigh’s tweet came in response to a series of tweets by writer Sarah Kendzior, in which she questioned why the media fails to follow up on stories relating to certain Jewish organizations and entities relating to Israel. Kendzior referenced the Chabad movement, which works to promote Judaism worldwide, and noted “how Chabad is used as a cover for criminal activity by international mafias.” Kendzior stated that “the press seems particularly reluctant to pursue these [stories],” and that it “is not surprising since those who do write about them are threatened.”

Replying to Kendzior’s thread, Burleigh tweeted, “Interesting thread. To answer your final question, Israel, mossad, Chabad and black cube…you’re hitting the third rail of American journalism, Sarah.” The troubling reference to “the third rail” indicates that Burleigh believes topics involving the State of Israel and Jews in general are too controversial to discuss.

“Nina Burleigh’s intimation that Israel and Jews in general are inherently controversial smacks of anti-Semitism and racist undertones,” said the National Council of Young Israel. “Rather than presenting a degree of objectivity, which should be the hallmark of any journalist, this reporter instead exhibited a bias that perpetuates anti-Israel animus and propagates anti-Semitism. In light of Nina Burleigh’s disturbing comments regarding Israel and Jews that revealed her prejudicial views and compromised her impartiality, Newsweek should immediately terminate her employment. Using one’s platform as a reporter to disseminate anti-Semitic prose is unacceptable, and Newsweek has a duty to ensure that there are ramifications for Ms. Burleigh’s offensive remarks.”

“Nina Burleigh’s comments about Chabad are particularly egregious, in that they come just a short time after we marked the tenth anniversary of the terrorist attack on the Chabad House in Mumbai, which killed Chabad emissaries Rabbi Gavriel and Rivka Holtzberg, and several others,” added the National Council of Young Israel. “Ms. Burleigh’s incendiary and insensitive remarks concerning Chabad were in extremely poor taste, in that they espouse a Jewish conspiracy theory that is completely unfounded and unbecoming.”