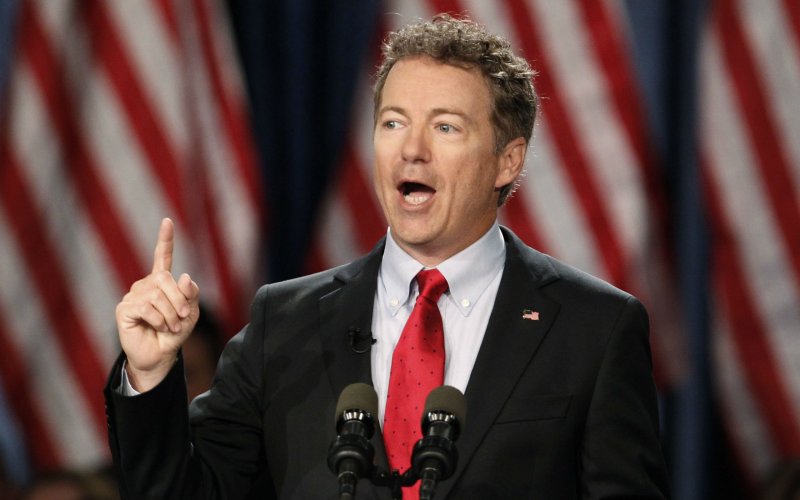 Real Clear Politics reports that this morning, Paul released this statement: “Currently, the United States has troops in dozens of countries and is actively fighting in Iraq, Syria, Libya, and Yemen (with the occasional drone strike in Pakistan). In addition, the United States is pledged to defend 28 countries in NATO. It is unwise to expand the monetary and military obligations of the United States given the burden of our $20 trillion debt.”

GEIST: We are going to get to health care in just a moment. But first we want to get your reaction to the words Senator John McCain had for you from the Senate floor yesterday. Let’s listen.

SEN. JOHN MCCAIN (R), ARIZONA: I note the senator from Kentucky leaving the floor without justification or rather any rationale for the action that he has just taken. That is really remarkable — that a senator, blocking a treaty that is supported by the overwhelming number, perhaps 98, at least, of his colleagues, would come to the floor and object and walk away. And walk away.

The only conclusion you can draw when he walks away is he has no argument to be made. He has no justification for his objection to having a small nation be part of NATO that is under assault from the Russians.

So, I repeat again, the senator from Kentucky is now working for Vladimir Putin.

GEIST: So, Senator, a little context around that. The vote was around putting Montenegro into NATO. What’s your reaction to Senator McCain’s characterization of your objection?

I do think that when we talk about NATO, there can be a rational discussion about the pros and cons of expanding it. We currently have troops, combat troops, in about six nations. We have troops actively just stationed in probably a couple dozen others. We have a $20 trillion debt. And one of my favorite articles of the last couple years is one that talked about the angry McCains, and if they — if we put active troops and got involved in combat where McCain wants us to be, they put a little angry McCain on the globe, on the map. And it’s virtually everywhere. So his foreign policy is something that would greatly endanger the United States, greatly overextend us. And there has to be the thought whether or not it’s in our national interest to pledge to get involved with a war if Montenegro has an altercation with anyone.

There’s also another argument, is that when you ask the people of Montenegro, only about 40 percent or slightly less are actually in favor of this. They are close to Russia, they’re close to being sort of, like Ukraine, in the transition from Europe to Asia. Perhaps it would be good to be like Switzerland and be more neutral and trade with both.

So, there’s a lot of considerations but to call someone somehow an enemy of the state or a traitor might be considered by most reasonable people to be a little over the top.

GEIST: But Senator, you just called John McCain unhinged. You said he was past his prime. Why do you think so many other senators have voted in favor of this measure if it’s so crazy?

PAUL: I think that there is a bipartisan consensus that’s incorrect that we should have the whole world be in NATO. For example, if we had Ukraine and Georgia in NATO — and this is something McCain and the other neocons have advocated for — we would be at war now because Russia has invaded both of them.

And so I think having former satellites or former parts of the Soviet Union is NATO is very provocative. And you have to decide in advance whether you’re ready go to war. If you guys are ready to send a million troops into Ukraine and fight World War III, you’re going to do it without my support because I think that’s a really foolish notion.

GEIST: Do you think, Senator, places like Albania and Croatia then should have been allowed into NATO in 2009?