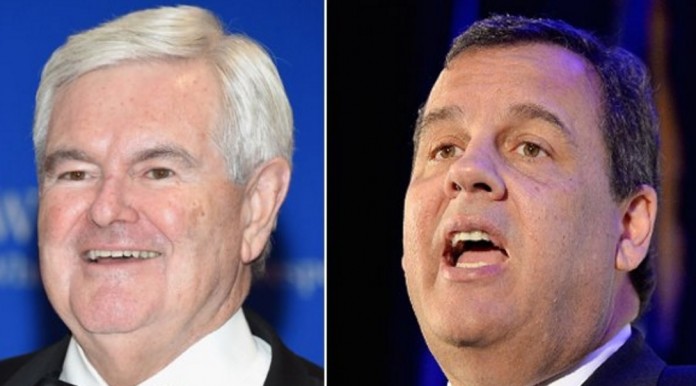 The Republican National Convention opens in Cleveland — we are all witnesses — in exactly 16 days.

That means that sometime over the next two weeks or so, we’ll find out who Trump has picked to be his vice-presidential running mate. Trump and his team have said all sorts of things about the timing of the announcement, including sometime soon and in the midst of the convention.

Trying to figure out a) who Trump will pick or b) who he is consulting in deciding whom to pick is, well, tough. But we do have some insight into where we stand in the process thanks to The Washington Post’s Bob Costa and Karen Tumulty. They wrote this week:

“Donald Trump’s campaign has begun formally vetting possible running mates, with former House speaker Newt Gingrich emerging as the leading candidate, followed by New Jersey Gov. Chris Christie. … Gingrich and Christie have been asked to submit documents and are being cast as favorites for the post inside the campaign.”

That all makes sense and is in keeping with the general criteria – political experience but with a willingness to speak out against political correctness – that Trump has laid out when talking about picking his vice president. Both Christie and Gingrich fit that bill. They also meet another important criteria for Trump: They’re willing to take the second-in-command slot if offered. Both men have no obvious next political step beyond this election, an end-of-the-line mentality that would lead them to sign on with the unpredictable real estate mogul.

Taking the Trump team at its word – gulp – Gingrich and Christie occupy the top two spots in our new rankings of the Republican veepstakes. Here’s who else makes the top 5.

If immigration is at the heart of Trump’s campaign – and it is – then picking the senator from Alabama makes some sense. Sessions has been the leading voice of hard-line conservatives on immigration for quite some time and found common cause with Trump on the issue, even becoming the first senator to endorse Trump. During a news conference in late May, Trump praised Sessions as “absolutely” someone he could pick as vice president. Selecting Sessions would barely move the needle nationally, however, since Sessions isn’t broadly known and comes from a part of the country where swing states are few and far between.

The Oklahoma governor has much to recommend her: She has spent time in office in Washington (she served in the House) and outside of it (she was elected governor in 2010) and, perhaps most importantly, she is a prominent female conservative. Trump has major problems among female voters – an issue that Hillary Clinton and her campaign have already been moving to exploit. Fallin has said she has had no “direct conversations” with Trump about the job, but that doesn’t mean much since her people could have provided all the information the nominee’s team needed to vet her.

The Indiana governor is headed to New York City this weekend to meet with Trump and is being formally vetted, according to NBC News. Pence is a bit of a late arrival to the veepstakes as his name has only emerged publicly this week. He does make a lot of sense for Trump, however. Pence is someone with strong ties to social conservatives, a voting bloc Trump continues to struggle to attract, and has spent time not only in Congress but also as a member of GOP leadership. Pence is also telegenic and a gifted communicator who hails from the part of the country – the upper Midwest – that Trump badly needs to make competitive.

No one has sacrificed more for Trump than the New Jersey governor. His decision to endorse Trump in the heat of the primary process cost him dearly within the political establishment – even among those who called themselves his allies. Christie has been by Trump’s side more than any other politician and, according to reporting on their relationship, is one of the few people who has the presumptive Republican presidential nominee’s ear. And Christie’s reputation for clashing with the media, his own party and, of course, Democrats will surely remind Trump of himself. Does Christie have the Washington know-how that Trump wants?

You can see why the former House speaker is appealing to Trump: He wakes up in the morning with 10 new policy ideas, he has spent time at the heights of Washington and he loves nothing more than upending the alleged wisdom of the political elites. Gingrich’s weaknesses are similar to Trump’s – he veers off message often, his personal life has been complicated and his ego is, well, massive – but Gingrich’s recent decision to change his position on trade – he helped pass NAFTA but now says he supports Trump’s more protectionist approach – suggests he knows he’s very much in the running and wants to make clear he very much wants the job.