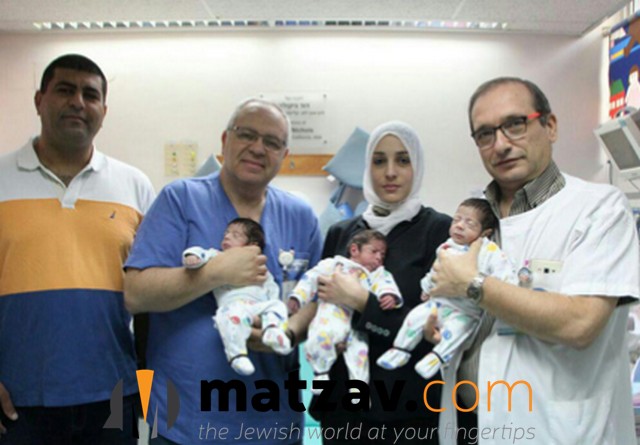 A set of identical triplets was released from an Israeli hospital on Sunday, after spending the month since their birth in the preemie ward, Israel’s Channel 2 reported.

According to the report, the three baby girls – conceived without fertility treatments – were born to an Arab family from the local council of Zemer in the Hefer Valley. This was much to the delight of their mother, who had prayed for a daughter after having produced five sons.

“Of course it won’t be easy and we will need a bigger car and hired help, but we’ll manage,” her husband, Osama added. “Their room is ready, and after five boys, suddenly it’s all in pink. It really is a happy occasion.”

According to Dr. Haim David, director of the obstetrics ward at the Hillel Yaffe Medical Center in Hadera, where the triplets were born, “This is a rare birth, which the professional literature says happens one in 10,000 pregnancies. Today, most triplets are not conceived spontaneously, and the recommendation for women carrying multiple fetuses is to abort one or more of them, due to the risk involved to mother and babies in attempting to carry them to full term. In this case, aborting one of them was not an option because they shared a placenta, and the only thing to do was to monitor the pregnancy carefully, and ‘drag it out’ to as late a stage as possible.”

Badran was indeed monitored carefully, Channel 2 said, and was even hospitalized a number of times with premature contractions. In the 32nd week of her pregnancy, Dr. David performed a C-section. The weight of the babies at birth was 1.735 kilos (3.825 pounds), 1.920 kilos (4.232 pounds) and 1.560 kilos (3.439 pounds). They were named Logeen, Aleen and Taleen.