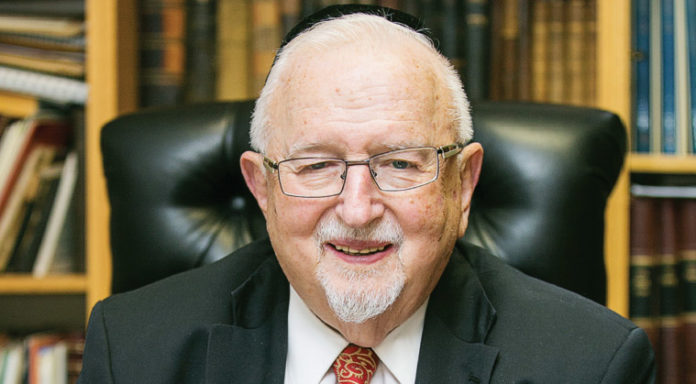 It is with great sadness that Matzav.com reports the passing of Rav Avrohom Chaim Tanzer zt”l.

Rabbi Tanzer served for over 55 years as rosh yeshivah of the Yeshiva College of South Africa, located in Johannesburg.

Born in 1935 and a native of Williamsburg, Brooklyn, Rabbi Tanzer later learned at Telshe Yeshivah in Cleveland, benefitting from the roshei yeshiva, Rav Elya Meir Bloch and Rav Mottel Katz,

After marrying his wife, Marcia, who hailed from Baltimore, Rabbi Tanzer learned in kollel at Telshe Yeshivah in Cleveland. Then, in 1963, he, at age 27, with his wife and their three young children, picked up and relocated to Johannesburg, thinking they’d remain for a couple of year at most. The Tanzers remained for over five decades, making a profound impact on the Orthodox community there.

The Tanzers arrived in South Africa at the height of the apartheid regime, three years after Sharpesville, when many white South Africans began to choose the opposite route, leading to a wave of emigration. This pivotal time in the political life of the country was accompanied by a Jewish renaissance in which rabbi Tanzer played a major role. Overriding their initial planned stay, they planted roots by remaining in the country for over 50 years. This allowed the Tanzers to ride the cusp of two unique experiences: a political emancipation from four and a half decades of apartheid and a Jewish reawakening after two generations of spiritual slumber.

Rabbi Tanzer’s commitment to the community stretched far beyond the institutions that he led, thus enabling him to have a far wider reach and influence. This forged him to the forefront of Johannesburg Jewry, guiding and shepherding people through a chaotic, destabilizing transformation that led to the creation of a “rainbow nation.” Despite his soft-spoken gentleness, he played a major role in transforming the Johannesburg Jewish community.

Today, the Yeshiva College campus, with its school and minyanim, is a powerhouse of Torah learning and living that has had an impact on the entire Johannesburg Jewish community and, by extension, South African Jewry and the Jewish people worldwide.

Rabbi Tanzer led a mosad that is comprised of over 1,000 students from elementary school through high school, along with a kollel, shiurim, and programs for women, as well as numerous minyanim throughout the week and Shabbos, thanks to Rabbi Tanzer’s influence and leadership.

“At its heart was the brilliance, warmth, kindness, and clarity of vision of Rabbi and Rebbetzin Tanzer,” South African Chief Rabbi Warren Goldstein remarked.

WATCH a replay of the levayah here: