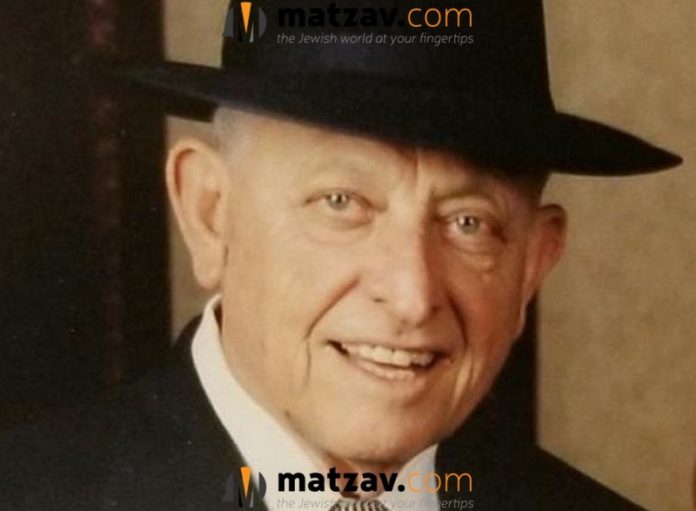 It is with great sadness that Matzav.com reports the passing of Rav Binyomin Tzvi Wolmark z”l.

Rav Binyomin Tzvi was born in pre-war Lithuania, where his father, Rav Yitzchok, served as rov of the city of Yod. Rav Binyomin was a young boy when the situation in Europe began to deteriorate. As things intensified, Rav Yitzchok was advised by the gedolim to rejoin the Mirrer Yeshiva, which had fled to Vilna. When the yeshiva received transit visas to Japan, the Wolmarks were among those who made the perilous journey to the Far East and ultimately Shanghai, where they spent five and half years.

Young Binyomin’s bar mitzvah took place during one of the family’s first few Shabbosos in China. Although just a teen, Binyomin spent his days with the Mirrer talmidim in the bais medrash. His father hired Rav Shalom Menashe Gottlieb, who later became rosh yeshiva at Yeshiva Bais Hatalmud in Brooklyn, as his tutor. Rav Nochum Partzovitz was a regular Shabbos guest at the Wolmarks in Shanghai, given the longstanding friendship between Rav Yitzchok Wolmark and Rav Nochum’s father.

When Binyomin arrived in the United States, he continued his learning at Yeshivas Rabbeinu Chaim Berlin, where he became a close talmid of Rav Yitzchok Hutner zt”l and received semicha from him.

At some point, Rav Hutner sent a group of talmidim to Bais Medrash Govoha in Lakewood, NJ, to learn under Rav Aharon Kotler, Binyomin among them. After two years in Lakewood, Binyomin went to Eretz Yisroel to continue learning in the re-established Mirrer Yeshiva, becoming close with Rav Chaim Shmulevitz and Rav Leizer Yudel Finkel. There he married Avigail Barg, daughter of Rav Mordechai Gimpel Barg, rosh yeshiva of Yeshivas Shaar Hashomayim of Yerushalayim. Rav Binyomin continued learning in Eretz Yisroel but was forced to move back to the United States due to the Suez Crisis.

Back in the United States, Rav Binyomin became a rabbi at the Mesivta of Eastern Parkway. After two years in New York, his rebbi, Rav Hutner, encouraged him to move to the fledgling southern community of Memphis, Tennessee. Rav Binyomin, his wife and small baby moved to Memphis in the late ’50s. They spent more than fifty years there, spreading Yiddishkeit and being marbitz Torah. Rav Binyomin was a rebbi in the local day school and yeshiva, while his wife taught in the day school and they were very active in the community.

When the Memphis Hebrew Academy honored Rebbetzin Avigail Wolmark several years ago, Rav Binyomin said that Torah was given in midbar so no one can claim the Torah as theirs; all have equal claim to Torah and that was what had spurred him to go to Memphis.

Growing up amongst giants leaves an indelible impression. Rav Binyomin was a tremendous talmid chochom, rising each morning at 5 a.m. to learn for a number of hours before the day began. His evenings were spent in the bais medrash of the Yeshiva Gedolah, where he had chavrusos or learned alone. For recreation, he would sit and read the Shaarei Yosher and Shaagas Aryeh.

In 2011, as the Wolmarks got older, they relocated to Monsey, NY, where the rebbetzin passed away in 2014.

Rav Binyomin’s passing on Pesach is especially poignant, as the Wolmarks’ Pesach Seder was always open to soldiers from the nearby Millington Naval Base. Some years, there were so many soldiers sleeping on the floors that there was no room to walk. Just as the Wolmarks devoted their lives to being mekarev others with sincerity and warmth, so may Rav Binyomin be welcomed On High.

Rav Wolmark leaves behind a large and beautiful mishpacha. His oldest son, R’ Zev Wolmark, is from the עמודי התווך of Los Angeles. His other children are Rav Mordechai Wolmark, rosh yeshiva of Yeshivas Shaarei Torah of Monsey, Mrs. Rachel Deutsch of Brooklyn, NY, and Asher Dov Wolmark of Skokie, IL.