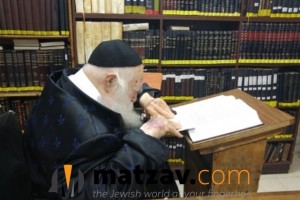 After being hospitalized since Motzoei Shabbos, Rav Chaim Kanievsky returned to his Rechov Rashbam home this morning, after doctors at Maayanei Hayeshuah Medical Center completed a battery of tests.

Rav Chaim had been hospitalized after suffering  from flu-like symptoms.

During the days of his hospitalization, Rav Chaim received remarkable care from the dedicated hospital doctors, who feel that there has been a considerable improvement in his health.

At the hospital, Rav Chaim continued his daily routine, learning continuously and answering dozens of shailos that arrive at his home every day.

With his release, Rav Chaim will continue his daily sedorim, but he will, for now, not be able to conduct kabbolas kahal, when he customarily greets people and shares his brachah or guidance. The photo above was taken shortly after he returned home today and resumed his learning.