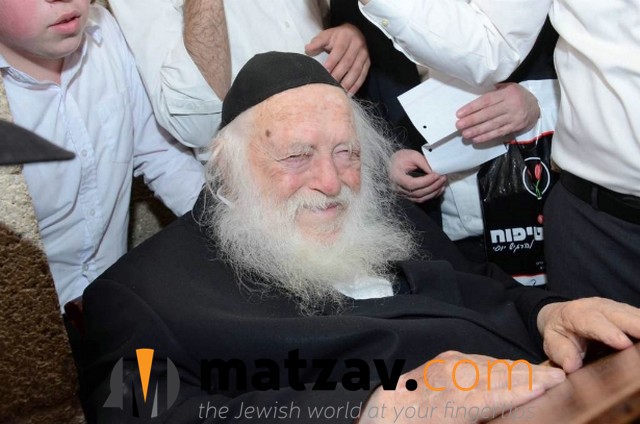 A yungerman in Bnei Brak was saved at the last minute from an expense of 30 thousand shekels thanks to advice from Rav Chaim Kanievsky.

A month ago, the yungerman, who is about 40 years old, felt excruciating pain in his back, and so he went to a hospital near his home, where he was told that would have to undergo surgery. The yungerman deliberated whether he should go to a private doctor in Israel or if he should have the surgery performed at a hospital in the United States for no cost.

Due to the intense pain, he could not leave his home, and he tried to contact Rav Chaim Kanievsky at his home, but all attempts failed; each time he called, he could not get through. Rav Chaim was immersed in learning and could not be reached.

The yungerman proceeded to make a date for the surgery at a local Israeli hospital to be performed by a private doctor, and he was informed that it would cost 30 thousand shekels. Shortly before the surgery, the yungerman asked his family to try to contact Rav Chaim Kanievsky one more time. “He might answer,” said the yungerman. After a month of attempts that were unfruitful, this time Rav Chaim himself answered the phone. The family member explained the situation and asked, “Should this surgery be done in the United States with no financial cost or should it be done here by a private doctor?” Rav Chaim replied, “Have it performed at a hospital in the United States and may you see a yeshuah.”

The yungerman informed the local hospital that he must cancel the surgery and he booked a flight to the United States for the surgery there. He was apprehensive, but he was determined to follow Rav Chaim’s advice.

The yungerman was shocked when, upon entering the surgery room at the American hospital, he saw that the surgeon who would be performing the procedure was the very same private Israeli doctor who would have operated on him in Israel at a cost of 30 thousand shekels.”

The operation itself was successful, and the yungerman expressed deep thanks to Rav Rav Chaim, whose guidance and brachah had saved him a tremendous sum of money.

“Whoever takes advice from chachomim won’t stumble,” he said.