[Updated, levaya info below.] It is with great sadness that we report the passing of Rav Menachem Porush zt”l, the noted askan and shliach tzibbur who served as a Knesset member for Agudas Yisroel and United Torah Judaism between 1959 and 1975 and again from 1977 until 1994.  He was niftar at his Yerushalayim home at the age of 94.

Rav Porush was born on 25 Teves, 1916, to Rav and Mrs. Moshe Glickman-Porush. He learned at Yeshiva Etz Chaim, and in 1938 went to work abroad as a correspondent for various frum publications. By 1949, he had become assistant editor of the Kol Yisroel newspaper. In 1954, he became a member of the Agudas Yisroel Center in Israel, and a member of the Executive of the World Agudas Yisroel. In 1955, he was appointed chairman of the Agudas Yisroel Center in Israel. During this time, Rav Porush also founded Children’s Town to promote Jewish education and combat missionary influence. 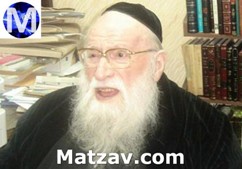 In 1959, he was elected for the first time to the Knesset on the Religious Torah Front list, an alliance of Agudas Yisroel and Poalei Agudas Yisroel. He was re-elected in 1961, 1965 and 1969. Between 1969 and 1974, he also served as deputy head of the Yerushalayim City Council, and in 1973 he established Kiryat HaYeled, an educational center for chareidi children.

Rav Porush also served as the nosi of the Chevrah Kadisha of Kehillas HaPrushim.

Rav Porush’s son, Rabbi Meir Porush, followed him into politics as a member of the Yerushalayim City Council and in the Knesset as a member of Yahadus Hatorah.

Rav Porush dedicated his life to tzorchei tzibbur and was a worthy emissary of the gedolim.

Update, 1:20 a.m. IDT: The levaya will be held tomorrow, Monday, at 1:00 p.m., beginning from the Agudas Yisroel building on Rechov Press, just outside of Kikar Shabbos in Yerushalayim. Kevurah will take place on Har Hamenuchos.