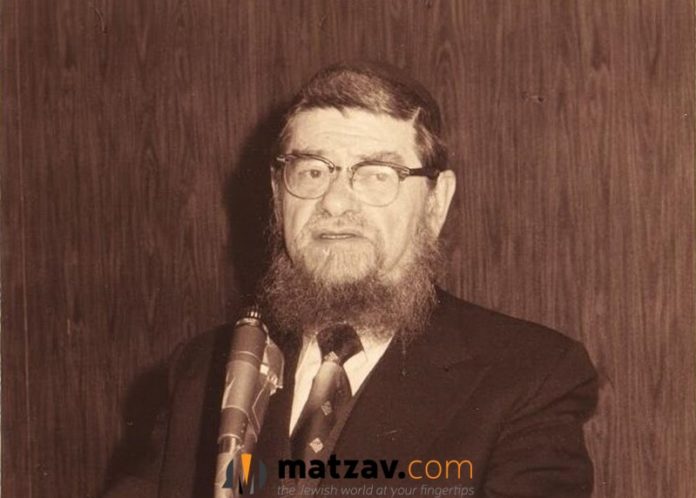 An Address Delivered by Rav Mordechai Gifter zt”l at Camp Agudah, New York, before Maariv on Erev Tisha B’Av in 1987

Prepared for publication by Malkeal Yusupov, on behalf of  Telshe Yeshiva Alumni Association

We are now entering, the most sorrowful of all the Holy Days of the Jewish year, Tishah B’Av, the ninth day in the month of Av. The day of the total destruction of our Bais HaMikdash , the holiness of which has never returned to the level of what it was before destruction took place, even after Bais Sheini, was built. Five great differences existed between Bais Rishon, and Bais Sheini. As Chazal tell us, in Meschtah Yuma: Yerushalayim, Eretz Yisroel, and Klal Yisroel never returned from that first Churban to its previous glory. We remain in a state of Churban. In Churban Bais Sheini, that Churban reached its highest stage from which we have not, nearly two thousand years later, returned to what we were. Every year, on Tishah B’Av, we remind ourselves, those who have a sense of history, of what we have gone through.

Yirmuyhu Ha’Navi in his kinnos speaks, not only of the Churban Bais Rishon of his day, but also of events that only a Navi can see. He saw and expressed in those words of the kinnos, all of the calamities of Klal Yisroel down to the ages including the last Churban, the European Churban, which removed from us all of Torah that Europe represented. All of these are contained in the kinnos of Yirmuyhu Ha’Navi.  Yirmuyhu in his prophetic visions saw all that happened, and would happen until Bais HaGoel B’mehara V’umenu.

It’s interesting to note that we don’t say Tachanun on Tishah B’Av. Tachanun is not said on Yomim Tovim. Moade Hashem M’kroe Kodesh. What day is more suited to Tachanun to become broken in tefillah, before Hashem Yisborach, than this day, Tishah B’Av? Yet we don’t say Tachanun. The reason for that is that the Navi in the kinnos says, “Kuru Uly Moed Leshbor Bachruy”. Hashem Yisborach has appointed a time, a Moed to break the best among us. So because it’s a Moed, an appointed meeting time with Hakadosh Baruch Hu, therefore we say no Tachanun. How do we understand this? Time to break the best, and that’s a day when Tachanun is not to be said.

The other way is, as we say in the kinnos, Betzase m’ Yerushalayim. We meet with him also, when we see the great Middas HaDin, when Hashem Yisborach demands that we return to the ways of righteousness and destroys all that is built upon non-righteousness. He has declared a day of meeting, in which we should see him, when the best within us will be broken down. That’s the Moed of Tishah B’Av, if we as Jews feel that it’s a Moed. We as B’nei Am Hashem, are inspired to feel that this is a day of meeting with Hashem Yisborach. In that moment, a Ben Yisrael rises to the greatest heights, for he sees before himself Hashem Yisborach. It is in a world that rules itself. We don’t live lives over which we are masters. In the midst of a calamity, in Middas HaDin, we recognize that Hashem Yisborach is our master. Once we stand before him, there can be no greater Moed. There can be no greater happiness for a Jew. Only a Ben Yisroel can rise to such heights, Leshbor Bachruy, he feels Moed, hisbodedus with Hashem Yisborach.

We have to meditate deeply on this. If we begin to feel what we are talking about, then after Tishah B’Av we have gone through what we go through after Regolim. Klal Yisroel comes to Yerushalayim Yir Hakadosh, to meet with Hashem Yisborach. In the Middas HaDin, if we recognize that it comes from Him, that He is the One who is talking to us, we are meeting with Him. It’s a Moed with Hashem Yisborach. This is the essence of Tishah B’Av, Yom HaChurban. All the calamities that we gone through from that day on are merely an extension of this Moed, with meeting Hashem, and seeing Him in this form of Middas HaDin. We are as Betzase m’Mitzraim when we saw him through Middas HaRachamim, Middas HaChesed, his kindness, and glory of giving of Himself to Klal Yisroel. In Churban we meet Him when He imposes His will upon us. Is a father cruel when he gives his son Makkos?  Will a son who loves his father say: you are cruel, you hate me?  Such a son is a mishugner; he does not have any sense. This son should understand what father means he sees in his father’s Peatch, how much daddy loves me. He does not want me to go astray, so he gives me shmitz to guide me along the right path.

In Middas HaDin in Churban we see, Hashem Yisborach in His true light, as the Loving Father of Klal Yisroel. You have learned, and cover a great amount in Torah, in order to begin feeling of this Moed, and Av Rachamin Who appears to us in the Middas HaDin. Chazal say: HaKadosh Baruch Hu wanted to create this world in Middas HaDin, but He saw that mankind would not be able to understand, and live through it. Therefore, He joined Middas HaDin with Middas HaRachamim. Not that Middas Din is not Rachamim, but if it’s given in its full content, we human beings don’t understand and don’t see,”Dos iz der Tatte Alein!– It is Daddy Himself! Er shmaist unz! We think that He is just beating us!”

We don’t see it. As a result, He adds Middas HaRachamim to Middas HaDin, so we should see Middas HaDin in its true light. This also is Rachem Hashem, the compassion of a loving father who guides his children throughout life in order to bring them – bring us – to the final Geulah. This occurs in stages so that we will be worthy of hearing the steps of Eliyahu HaNavi, who will announce to us and the world at last the return of Mashiach Ben Dovid. This is the goal of the tears, the abject sorrow in which we are engaged on Tishah B’Av, when we sit down on the ground and bewail the Churban. We begin to cry over what we have lost.

Do we really realize what indeed we have lost? Especially you American youth, do you realize of what we had? That’s why it’s so difficult for American youth, even Yeshiva youth to understand Tishah B’Av. I was privileged as an American youth, to spend over five years in Telz. To see something of what that the world represented, what Torah in its essence really is. Not the comforts of life, but the pleasures of Torah. Not the pleasures of Olam HaZeah, but the Tanig of Olam HaBah. Amal HaTorah, horvin af ea gemora, mutchrinzich. How can you sleep if you don’t understand a Tosfes, and the Tanig when I finally got to understand it, was so overwhelming. I have no words with which to describe it, it’s beyond human language. American youth, even those that are engaged in Torah learning, are far removed from that world because there are too many comforts in this world.

Olam HaZeadika Tanugim,Narisha Tanugim. Emptiness, so there is no appreciation for what indeed is Tanug, and Olam HaBah. You don’t have to wait to go upstairs for Olam HaBah. If only we would realize it, we have Olam HaBah on every step. Every word of learning, pusik Chumash, perek Mishna, Blatt Gemara! If one is totally involved and knows of nothing else, that’s Olam HaBah. That’s not part of this small world that we live in, that’s Olam HaNeshumos – the World of the Soul. When you learn Rashi or Tosfis in Gemara, you begin to realize. I’m not listening to the Torah of human beings; I’m listening to the Torah of Malachim – Angels. Who then if not a Malach can stand in Sfraid and realize what the Churban means. The greatness of our Rishonim, this should give us inspiration in learning. We’re not accustomed to it. We have a long way to go in the depths of learning. Vus zuktz Rashi HaKodesh, vus frek Tosfis, vus enfert the Rashba!? We have very long way to go. Without learning we will never begin to understand these things. Tishah B’Av will be an empty day of sobbing for things, crying without knowing why we cry. If we shall learn Torah, involve ourselves completely in Torah learning, if we shall try to forget the comforts of American living and live by the word of Torah. Ke Hem Chaenu Varuch Yamenu. When we should reach that stage and live by that, then we should have that great Tanig of what Torah means and what being in a yeshiva signifies. Our whole manner of living will then represent the fact that we are B’nai HaYeshivah. We are not just human beings, who walk around the same as high school and college students walk around in this world. We are from a completely different world. We are on a different planet. They cannot understand us. We don’t understand ourselves, to our great sorrow. Our job is to begin to understand ourselves. Then when Tishah B’Av comes, and I hope we won’t have another one, this Tishah B’Av, if we try to understand it in this light then we will know of what we are crying about. What have we lost, what we have given up.  The gedolim down through ages were infused with something of this inspiration. As the years go by, we keep losing more of these Gedole Yisroel. They brought forth the yeshivas from overseas, with the hope that the yeshivas here will reach the stage, where they will also becomes infused with what we are.

What is Torah, and Torah learning? We will say in the Kinnos of Tishah B’Av: A fire burns within me, when I begin to remind myself of that great day. I am reminded of when I lived through the mercies and kindness of Hashem Yisborach when he took me forth from Mitzraim. I’m full of abject sorrow, when I have to remind myself that terrible day that I was driven out from Yerushalayim. In those days, Moshe Rabbenu sang that Shir that shall never be forgotten. Betzase m’Mitzraim, those were the days of Chesed Hashem. Then came that terrible day, when Yirmuyhu wailed. He cried forth these kinnos. When we went forth from Yerushalayim and lost all that Hashem Yisborach had granted and given us because we did not feel what we had received and we became unworthy of what our Father gave us. So He took that gift from us.

You will say this entire kinna on Tishah B’Av. Think of what you’re saying. Think of the two sides of the coin. Both sides represent, Moed, a meeting with Hashem Yisborach. One side of the coin is Betzase m’Mitzraim, a Chesed Hashem. The other side of the coin is Betzase m’Yerushalayim, a Churban of loving father who in that matter wishes us to come back to Him, and understand what it’s all about. We will then be zoche Torah and our mission for all time with all the wonderful instruments given to achieve that mission. Betzase m’Mitzraim, when we were brought out of Mitzraim. We hope to live to see overwhelming happiness, pleasure and joy. The suffering and pain that we live with in this world should leave us. We should be Zoche to return to Yerushalayim Bemhare V’umnu  Amen.