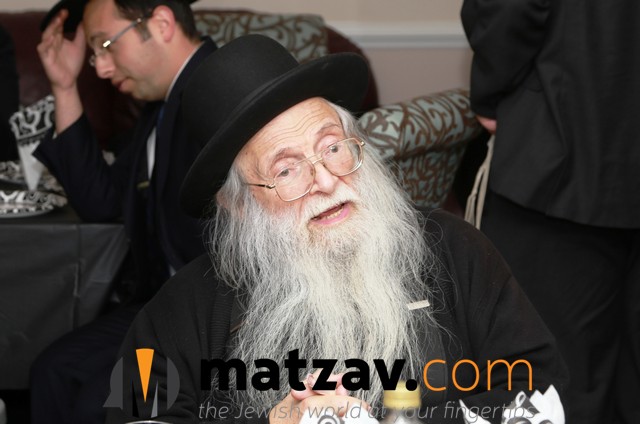 It is with great sadness that Matzav.com reports the passing of the Rav Shmuel Yerachmiel Kaufman zt”l, legendary mechanech from Detroit, Michigan, who impacted thousands of talmidim over many decades.

Born in New York, Rav Kaufman was a son of Rabbi and Mrs. Fishel and Fraida Kaufman. Fraida, Rav Kaufman’s mother, was a daughter of the great tzaddik, Rav Yaakov Yosef Herman zt”l, Torah pioneer of All for the Boss fame.

In his younger years, Rav Kaufman learned at Yeshiva Torah Vodaas and then at Telshe Yeshiva in Cleveland, where he was impacted for life by the roshei yeshiva, Rav Elya Meir Bloch and Rav Mottel Katz, and by the derech of Telshe in Torah and avodah.

As a bochur, Rav Kaufman moved to Detroit, where he began his remarkable chinuch career, teaching locally.

Rav Kaufman subsequently went to Los Angeles, where he taught and was a counselor in a summer camp under the auspices of Rav Simcha Wasserman zt”l. That summer was an eye-opener for Rav Kaufman. It was the first time that he observed that there are so many Jewish children who weren’t frum. Most of the children in that camp came from homes that were not Shabbos observant. They knew very little about Yiddishkeit, but were very receptive to the messages and lessons imparted by Rav Kaufman.

Rav Kaufman was very successful that summer, and Rav Wasserman was so impressed that he offered Rav Kaufman a teaching job in Los Angeles for the coming year. Not knowing what to do, Rav Kaufman called his uncle, Rav Chaim Pinchos Scheinberg, and asked for an eitzah. He said not take the job. As a child, Rav Kaufman had been inflicted with polio and suffered from a limp. Rav Scheinberg felt that it would be too difficult for the parsha of shidduchim to be in Los Angeles, so Rav Kaufman declined the job.

Rav Yosef Elias, who was then the principal in Yeshiva Bais Yehuda, visited Telshe in Cleveland at the time, and Rav Kaufman went to talk with him, seeking a job in chinuch. Rav Kaufman had no formal experience, so Rabbi Elias asked him, “What makes you think you are cut out for chinuch and that you will be a good rebbi?”

“I’ll tell you the truth,” Rav Kaufman answered. “I love children and I love being mashpiah!”

Upon hearing that, Rabbi Elias exclaimed, “You are hired!”

After his marriage, Rav Kaufman taught for four years in Elizabeth, NJ, where he settled so that he could be near his wife’s mother, who lived in New York City. His influence in Elizabeth was strongly felt, as he instilled Torah haskafah in the young charges under his tutelage.

In 1956, Rav Kaufman moved back to Detroit, where he would spend the rest of his life teaching at Yeshiva Bais Yehuda. His career in chinuch there is difficult to encapsulate. The hashpaah he had on so many people rendered Rav Kaufman one of the most outstanding mechanchim in the country. Untold numbers of talmidim are indebted to Rav Kaufman for inspiring them, teaching them, and serving as a role model for them to emulate.

Rav Kaufman transformed the lives of the numerous Jewish children entrusted to his care, and because of the positive exposure to Yiddishkeit that they encountered in his classes, they went on to build exemplary Torah families. In addition, many of his talmidim themselves became mechanchim, mechanchos, menahelim and menahalos who have in turn taken the opportunity to transmit the love of Yiddishkeit that they received from Rav Kaufman to future generations of talmidim.

Bais Yehuda had an afternoon school, catering to children in public schools whose parents wanted them to have a minimal Jewish education. Some of Rav Kaufman’s greatest success stories came from those afternoon students.

As mentioned, as a child, Rav Kaufman contracted polio, a disease that returned later in his life, ravaging his body. Despite being a tremendous baal yissurim, Rav Kaufman possessed unbridled simchas hachaim. He lived his lived amidst immense simcha, never allowing his physical ailments to impact his mission in life to inspire youth and to radiate the joy that comes from living purely for the Ribono Shel Olam. During the last years, he had difficult sleeping and was forced to ingest dozens of pills a day to address his various medical issues, yet his face shone with pure happiness and gratitude to Hashem, and he vibrantly went about teaching, influencing and uplifting all those who were blessed to enter his orbit and bask in his presence.

Kevurah will take place in Eretz Yisroel after Shabbos at the Eretz Hachaim Bais Hachaim in Bet Shemesh.

Shivah will take place at the home of Rabbi and Mrs. Shimshon and Nechama Jonas, located at 15620 Arbor Place in Southfield, Michigan, until Thursday morning. Shacharis will be at 8 a.m., Minchah at 8 p.m., and Maariv at 10 p.m.