Since April 2008, the Gateshead kehillah has benefitted from the leadership of its rov, Rav Shraga Feivel Halevi Zimmerman. Now, eleven years later, Rav Zimmerman is moving on, having been hired by the Federation of Synagogues in London to serve as the new head of its Bais Din, Matzav.com has learned.

Rav Zimmerman will assume the new position in several months, when the current head of the Federation Bais Din, Dayan Yisroel Lichtenstein, retires.

Rav Zimmerman previously served as rov at Khal Adas Yeshurun in Monsey for many years and was active in a number of important matters, including the battle to preserve bris milah in New York State when it came under attack about 15 years ago. He took up his appointment in Gatehead in 2008, in succession to Rav Betzalel Rakow zt”l, who passed away five years prior.

Rav Zimmerman, who is a talmid of Yeshivas Mir and Rav Dovid Soloveitchik, also previously served as a dayan at Khal Adas Yeshurun (Breuer’s) in Washington Heights, New York. He is a noted posek, a talmid chochom of renown, and a sought-after speaker and guide.

Today, Rav Zimmerman formerly accepted his new position as av bais din of the Federation of Synagogues in London, where he will relocate to from Gateshead. However, he already announced his acceptance of the position yesterday, on Shabbos, to a packed crowd of 350 people at his Pirkei Avos shiur in the Gateshead Shul.

“I have been mekayeim Rav Yitzchok Scheiner’s words to put Gateshead back on track,” he remarked, stating that he has made the decision to move on at this time.

Rav Zimmerman oversaw the expansion of Gateshead, which has experienced growth of over 100% during the last decade, drawing many younger families who wish to live in a place where the schools, shuls and standards are overseen by the rov.

Matzav.com learned that Rav Zimmerman, during his years in Gateshead, had over 10,000 personal meetings with members of the community, and each and every individual knew that they could turn to the rov for advice, encouragement and to share their simchos with.

Today, Rav Zimmerman met with Federation dayanim, as shown below, and they celebrated a lechayim, confirming the new appointment. 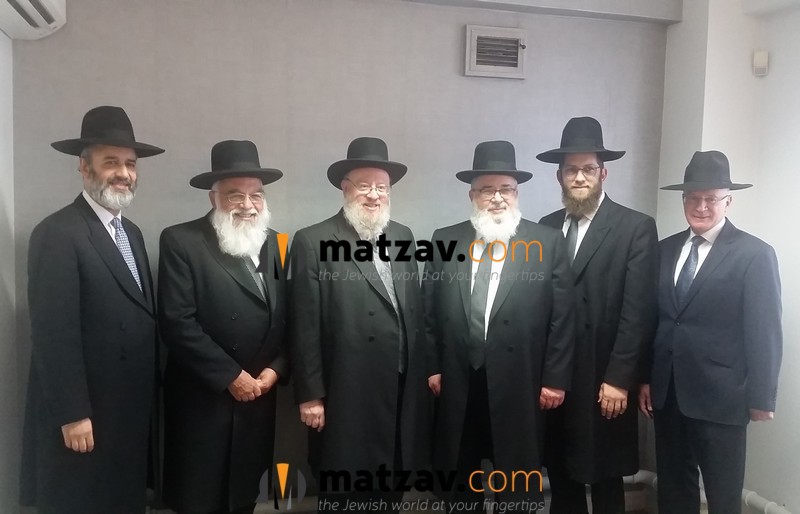