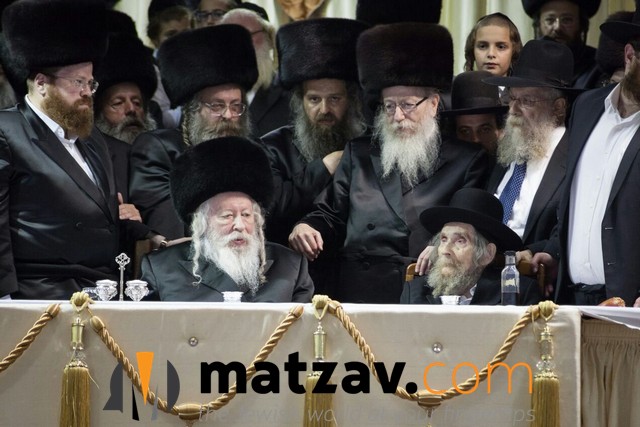 The Torah world was excited to learn of the participation of Rav Aharon Leib Shteinman in the wedding of the Gerer Rebbe’s grandchil last night, as reported earlier on Matzav.com.

Yesterday’s event was the culmination of efforts that began last Pesach, when Rav Gershon Edelstein, rosh yeshiva of Ponovezh Yeshiva, was visited by MK Yaakov Litzman of Agudas Yisroel and they discussed repairing some of the schisms within the Torah world.

Subsequently, a Gerer businessman was asked by two sons of the Gerer Rebbe to contact a grandson of Rav Shteinman, Rav Dovid Shapiro. Rav Shapiro was told that the Rebbe’s sons wish to make a sheva brachos for the current simcha in the Rebbe’s family in Bnei Brak and that they would like Rav Shteinman to honor them with his participation.

In recent years, internal politics within the chareidi community have greatly bothered the Rebbe, and he wished to do what he could to restore peace and a warm relationship between all parties.

Rav Shapiro spoke to the Rebbe’s sons himself and then spoke to his grandfather. Rav Shteinman heard the idea and immediately responded, “Forget about the sheva brachos. I will go to the wedding.”

Rav Shapiro was concerned, because the trip to Yerushalayim is difficult for the centenarian gadol, but Rav Shteinman insisted that they not make a sheva brachos special for him, stating that he would attend the wedding personally.

Rav Shapiro told his zaide that members of the Rebbe’s family wanted to invite him formally and officially, but Rav Shteinman smiled and said that there was no need for them to do so. The invitation via Rav Shapiro sufficed, he said.

In the end, one of the Rebbe’s sons arrived early yesterday morning at the home of Rav Shteinman in Bnei Brak to invite him personally.  For about 20 minutes, Rav Shteinman spoke to the son and told him fondly: “Please tell your father that I am his true friend and always have been.”

There was some concern about Rav Shteinman’s fragility amidst the massive crowd, but special arrangements were made to ensure his utmost safety. Rav Shteinman participated in the wedding last night amidst great joy. The Rebbe reportedly expressed his great satisfaction that Rav Shteinman took part in the simcha in person.