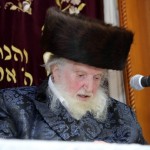 Rav Moshe Sternbuch, rosh av bais din of Yerushalayim, said this morning that the tragedies that have occurred in Eretz Yisroel with the recent terror attacks are “due to those who, in violation of Torah law, have visited the Har Habayis.”

Rav Shternbuch attributed the terror attacks to the violation of this issur kareis, despite the clear ruling of leading gedolim, both past and present, that ascending the Har Habayis is absolutely forbidden according to halachah.

The raavad has, in the past, on a number of occasions, stated that those who ascend the Har Habayis endanger Jewish lives.