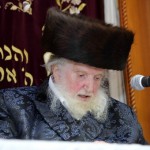 The rosh av bais din of Yerushalayim, Rav Moshe Sternbuch, today again condemned those who visit the Har Habayis in violation of the p’sak of the greatest poskim of the generation, both past and present.

A person who goes on to the Har Habayis will ultimately pay a price for it, Rav Shternbuch said.

Speaking this morning, he remarked, “This year, there were multiple murders during Sukkos in the holy city of Yerushalayim, and certainly those handful of people who go on to the Har Habayis will be held accountable for that, because they provoke the Arabs to kill us, and what’s more, they make the war against the Arabs a ‘religious war,’ as the Har Habayis is viewed as a holy place for them. The fight over the mount is a war of religion, and that puts us in great danger. Many of the Arabs are willing to give their lives for their religion and harm and kill us for that purpose.

“The government helps them by putting thousands of military personnel to protect [those who visit the Har Habayis] to ensure that no harm will befall them…They don’t pay attention to the fact that this caused terrible incitement…and several victims, unfortunately, have already suffered as a result. ”

“Halevai,” he later added, “that someone nowadays would hire guards to stand at the entrance to the Har Habayis to inform [Jewish] passers-by that from that point forward it is forbidden to enter according to Torah law, and this will fulfill our duty to watch over the Har Habayis and prevent sakanah to the Jewish people.”

Earlier today, Matzav.com reported that Israeli Prime Minister Bibi Netanyahu ordered police to prevent Israeli ministers and members of Knesset from entering the Har Habayis, in a move aimed at reducing recent sky-high tensions between Israelis and Palestinians. The Prime Minister’s Office later clarified that the directive to ban ministers and MKs from the Har Habayis until further notice applies to Jewish and Arab Knesset members alike.