It is with great sadness that we report the passing of Rav Yisroel Elya Weintraub zt”l, renowned mashpiah and mekubal from Bnei Brak. Rav Weintraub was a renowned mekubal of the yeshiva world. A gaon in Torah and a tzaddik whose tefillah was extraordinary and whose brachos were sought after by Yidden from across the spectrum, Rav “Elcha” was one of the most revered gedolim of our time. Rav Weintraub was a baal yissurim who suffered from various disorders. During the last years, he could barely see and was in constant physical pain. More recently, his situation took a turn for the worse and Yidden were asked to daven on his behalf. He was niftar a short while ago at the Mayanei Hayeshuah Medical Center in Bnei Brak.

Rav Weintraub was born in America in 1932. The Brownsville neighborhood of Brooklyn was home to more than 100,000 Jews at the time and the language of the streets was still the Yiddish of the alteh heim. While the American melting pot was claiming countless young souls to assimilation, there were individuals such as Rav Yisroel Elya who clung to the mesorah of old and attached themselves to rabbonim and talmidei chachomim. The young Yisroel Elya applied himself to his studies with the diligence of one far older in years. He developed a close relationship with Rav Yitzchok Hutner zt”l, rosh yeshiva of Yeshivas Rabbeinu Chaim Berlin, whose mastery of inyonei machshava and the works of the Maharal had a profound influence on his protégé.

Rav Yisroel Elya went on to serve as a mashgiach in Yeshivas Rabbeinu Chaim Berlin before emigrating to Eretz Yisroel in the early sixties. He lived for a short while in Yerushalayim and moved to Bnei Brak forty-five years ago. He became one of the outstanding luminaries of Kollel Chazon Ish and a fixture of the neighborhood around the famed Lederman Bais Medrash. He was a chavrusah of the Steipler Gaon zt”l and was one of the closest friends of his neighbor on Rechov Rashbam, Rav Chaim Kanievsky. Indeed, visitors to Rav Chaim in need of a yeshuah were often referred to Rav Yisroel Elya for a bracha. 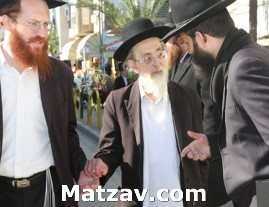 The gedolei Yisroel long relied upon Rav Yisroel Elya to articulate Daas Torah in regard to hashkafa. It is well known that when questions of this nature were presented to Maran Rav Elazar Menachem Shach zt”l, he would often ask if Rav Yisroel Elya had already been consulted, “for his opinion is what I advise you to follow.”

After the Six Day War, many Torah Jews were confused. The open miracles witnessed by the citizens of Israel seemed to point to a Divine approval of the Jewish State. Rav Yisroel Elya was asked to address the subject and indeed penned a pamphlet that Rav Shach and the Steipler held to be the definitive work on the subject.

Rav Shach was afraid that the appearance of the pamphlet on its own, written as it was by a relatively young author, would invite opposing works and leave the Torah community in confusion. The Rosh Yeshiva instructed Rav Weintraub to write a sefer and include his work on the Six Day War as an addendum. Those close to Rav Shach did not understand his directive at the time, but eventually saw the results of the Rosh Yeshiva‘s vision.

Rav Weintraub wrote his sefer “Mikveh Yisroel” pertaining to purity in halacha and employing a breathtaking grasp of inyonei kabbolah. The Olam HaTorah greeted the publication with a level of awe and respect that few seforim receive. The gaonus of the author was so apparent that Rav Yisroel Elya was immediately established as one of the rising gedolei Torah of the era. His hashkafic treatment of the Six Day War was thus accepted by all with the deference Rav Shach felt it deserved, and no one in the Torah community attempted to issue a rebuttal.

From that time on, Rav Yisroel Elya’s humble home became the place where outstanding talmidei chachomim gathered to hear shiurim on Nefesh Hachaim, Maharal and sugyos in kabbolah. Some of the greatest ba’alei machshava of our time consider themselves talmidim of Rav Weintraub and consulted him as the last word in hashkafa.

Rav Weintraub’s legendary tzidkus and steadfast emunah helped him weather the many medical problems he was plagued with over the years. Once, he fell on a Thursday night and, r”l, fractured his hip. He questioned if a “sakonas eiver” justified the chillul Shabbos of the doctors who were to operate on him late on Friday. A p’sak from the leading poskim convinced him to go through with the surgery, but he refused to allow anesthesia during the painful procedure. The doctors worked in amazement as the frail sage remained unflinching throughout the operation.

Afterwards, his faithful talmid, Rav Michoel Lyons, questioned Rav Weintraub as to how he was able to withstand the pain. “I simply concentrated on the first half of Aleinu,” Rav Yisroel Elya replied. “If you can maintain your focus in your mind, it is not hard for the body to remain relaxed.”

The levaya will take place tomorrow morning, at 10 o’clock, at the Lederman Shul on Rechov Rashbam in Bnei Brak. As per Rav Yisroel Elya’s tzavaah, there will be no hespeidim, but rather divrei hisorerus.