Senator and former Majority Leader Robert J. Dole, Chairman of the Board of Trustees of the Caring Institute, today announced the winners of the 2009 Caring Awards. Five remarkable adults and five youths will be honored during the Caring Awards ceremony at 6:00 p.m. on October 13 at the Westin Bonaventure Hotel in Los Angeles, California. An international winner will also be recognized that evening, and the Dalai Lama will be presented with a Mother Teresa Lifetime Achievement Award, either in LA or at a time convenient for him.”On behalf of our Board of Trustees, it is a great honor for us to pay tribute to these extraordinary people who have used their lives for the betterment of others. They are wonderful role models and the very personification of caring,” said Senator Dole.

The Caring Institute’s mission is to promote the values of caring, integrity and public service. It was founded in 1985 by Val J. Halamandaris after a meeting with Mother Teresa of Calcutta. Mother Teresa said that there was a poverty of the spirit in the developed world which was much worse than the poverty of the body seen in the third world and directed Halamandaris to do something about it. Halamandaris put in place an awards program and a system for identifying people who give back to society in extraordinary ways and holding them up as role models to be identified by others. The Caring Institute is a nonprofit 501 (c)(3) charitable organization.

Since moving to the United States from the Philippines 20 years ago, Dr. Asperilla has devoted his life to providing free medical treatment and supplies to care for thousands of needy persons in the U.S. and countries such as Peru, Ecuador and Guatemala.

Ms. Lucas transcended the domestic violence perpetrated against her by creating an organization 10 years ago that helps battered women in 175 countries to find housing, obtain custody and support their children.

John Dau was the leader of the so-called Lost Boys of Sudan. Along with 27,000 others, he walked more than 1,100 miles to freedom. Having been granted asylum in the U.S. in 2001, he raised $700,000 and returned to open a clinic in Southern Sudan, which has provided care for over 25,000 patients, most of whom had never seen a doctor before.

General Colin Powell achieved the pinnacle of success and is in a class by himself when it comes to philanthropy. He created America’s Promise in 1997, enlisted over 500 organizations to help America’s youth, raised over $300 million and provided essential services to more than 10 million children.

The Collector of Bedford Street

Neither a stroke which confined him to a wheelchair nor his developmental disabilities have been able to stop him from raising more than $400,000 for such causes as AIDS and Muscular Dystrophy over the past 20 years. 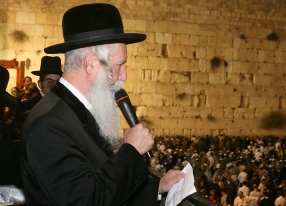 Beginning 35 years ago, Rabbi Grossman began caring for boys from broken homes. As of today, he has built and runs a campus with 18 schools and 7 day care centers that cares for and educates some 7,000 underprivileged young people each day. Known as the “Father Teresa” of Israel, he was twice offered the post of Chief Rabbi in Israel, a post he declined in favor of continuing to help the thousands of young people who need him.

Zach has given wagonloads of love to America’s 1.3 million homeless kids. In the past two years, he has walked 500 miles to spotlight their plight and collected $350,000 in donations. This money has provided homeless kids with toys, Christmas parties, and “Zachpacks” full of school supplies and food.

Ana was adopted as a baby from an orphanage in Peru. But she left a piece of her heart back in the mountains of her mother country. Since visiting there at age 11, she’s raised $150,000 dollars to give Peruvian orphans the food, education, and health care they need to grow up strong and be able to give back someday.

Austin has taken aim at illness in Zambia by shooting over 10,000 free throws. Since 2004, players in his annual basketball shoot-a-thon have scored more then $1 million dollars. But the real winners are Zambian kids. Austin’s nonprofit has built two clinics so there will be fewer orphans, outfitted 1,000 caregivers with bikes, and even built a high school with its own basketball court.

Rachel and her sister Kelsi want you to show your patriotic spirit by playing their online game. It’s a treasure hunt that funds a scholarship program for military families. Contributions from players have helped add up to $5 million or 1,800 scholarships that let families of U.S. troops enjoy the chance for an education. And that’s the greatest treasure of all.

Heather spent the first seven years of her life locked in a room by her drug-addicted mom. She now has a loving new parent, but she still remembers the fears she faced as a foster child. So she’s written 11 booklets about how to deal with the foster care system. Writing booklets and conducting toy drives have helped Heather cope with her hurts and helped 1,500 foster kids cope with theirs, too.