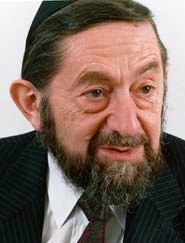 It is with great sadness that we report the passing of Reb Moshe Yosef (Paul) Reichmann z”l at the age of 83.

Best known for his leadership of the Olympia & York a real estate development company, Reb Moshe was one of the greatest baalei chessed and baalei tzedakah of his generation, supporting mosdos and Jewish undertakings across the world.

Reb Moshe was born in Vienna in 1930 to Mr. Shmaya and René Reichmann. His father was a wealthy egg merchant and rose to prominence in Hungary. The family escaped the Nazi occupation of Austria with great Hashgacha Protis, as they happened to leave the country on the day of Anschluss, to visit Reb Moshe’s grandfather in Hungary who had suffered a stroke. Abandoning their lives in Vienna, they made their way from Hungary to Paris, where they settled. The Reichmann family fled when France fell to the Germans, eventually making their way to the neutral city of Tangier.

In Tangier, the family prospered as Reb Moshe’s father became a major currency trader. After the war, Reb Moshe’s left home to learn in yeshiva in Gateshead, England, and Ponovezh and Mir in Eretz Yisroel.

In 1953, Rav Avrohom Kalmanowitz called him to become the Educational Director of Otzar Hatorah in Morocco. With Moshe Lasry, a young engineer who shared his ideas and ideals, and Rabbi Aharon Monsonego, the young principal of the 1,000 student Talmud Torah in Casablanca, Reb Moshe overhauled the organization’s religious curriculum and upgraded its teaching staff, travelling all over Morocco and helping to establish tens of schools for thousands of children, among them the first girl’s seminary in Tangier.

In 1955, in Montreux, Reb Moshe married his wife, Leah, nee Feldman, to whom he had been engaged from the age of 15. In mid-1956, he left Otzar Hatorah and sailed to New York. From there, he left for Toronto where, after a few years, most of the Reichmann family gathered together.

Unsatisfied with the local builders, Reb Moshe decided the company would construct its own warehouses and offices. Soon the company was building such facilities for others. In 1964, Olympia and York was founded as a separate building and property development firm.

The firm was soon profitable, and expanded rapidly. It also accepted difficult projects, including the construction of First Canadian Place, Canada’s tallest building, in 1976. The company expanded to New York and Tokyo and by the mid-1980s it was the largest developer in the world, and the Reichmanns were one of the world’s richest families.

At its peak, Olympia and York Industrial Development Company constituted the greatest real estate empire the world had ever seen. Two sentences could express the Reichmann’s way of doing business: “Their edge was their integrity” and “Their word was their bond.” The Reichmanns were one of the ten wealthiest families in the world, ranking just below the British Royal family in the 1980s. However, the Reichmanns resisted assimilation and never modified their strict adherence to halacha.

Reb Moshe’s success had little impact on his lifestyle. He remained very private and unwilling to talk to the press. He was a mokir rabonon and machshiv Torah and utilized his largesse to support mosdos haTorah and chessed endeavors all over the globe. In Toronto, he built a number of yeshivos and shuls, helping it become the ihr v’eim b’Yisroel that it is today.

Olympia and York ran into severe trouble in the early 1990s due in part to a general decline in the world economy, but the company was truly brought low by the Canary Wharf project. It was the world’s largest property development, but remained half empty. Reb Moshe had taken the project as a major gamble, having been impressed by Margaret Thatcher’s reforms and obtaining a personal promise from her that she would help the project, most importantly by extending the London Underground to reach it. In 1992, Olympia and York folded.

Despite setbacks, Reb Moshe successfully rebuilt a small portion of his empire, including, setting up a partnership to purchase a controlling stake in the Canary Wharf from the banks that made the original construction loans to him and which had taken control of the development. Reb Moshe became chairman of Canary Wharf again and remained so until 2004.

Reb Moshe, in 2005, at the time 75, announced that he intended to retire from business and sold many of his property holdings.

One of the most famous stories from Reb Moshe’s lifetime is as follows:

Rav Moshe Yehudah Schneider headed his yeshiva in Frankfurt, Germany, until the German Gestapo closed it in 1939. After Herculean efforts on his behalf, permission was received from the British government to reestablish his yeshiva in the Stamford Hill section of London.p

The Jewish community was hard pressed to provide for all the refugees that came in from the continent. As such, it was extremely difficult to raise funds for the yeshiva. Nonetheless, Rav Schneider and his wife did all they could to assure the safety and wellbeing of their talmidim.

The Grodzinsky family of Golders Green owned a bakery, and they told Rav Schneider that they would donate any bread, cake or rolls that were not sold after three days, but the yeshiva would need to send someone to pick them up. Rav Schneider was ecstatic. To provide such an important food stable to the yeshiva free of charge was quite a help.

The yeshiva organized a rotation whereby everyday a different student would travel by bus to the bakery and haul all the bread and rolls back to the yeshiva. It was a wearisome journey, and some of the students even tried to avoid making the trip. But there was one student in the yeshiva, a boy named Moshe, who never missed his turn. Even more so, he would often fill in for someone else if need be.

Rav Schneider also felt it inappropriate for anyone to run into shul only a few brief moments before davening was about to start. Therefore he instituted an hour of scheduled learning before Shacharis in the morning. In order to make this plan work, Rav Schneider needed someone to rise before everyone else and wake up all the boys so they could start learning on time. A second Moshe volunteered to do the job. He was always up shortly after 5 a.m. and would rouse the others to be on time.

Both came to pass. Reb Moshe Reichmann became a world renowned real estate developer and a legend in chessed and hachzokas haTorah. Rav Moshe Shternbuch is today the rosh av bais din of the Eidah Hachareidis.

It is said that when Reb Moshe Reichmann was reminded of Rav Schneider’s prediction, he said, “I wish I had been the one who woke up the boys in the morning!”

Reb Moshe was one of the most resourceful and resilient entrepreneurs of the 20th century and, at the same time, one of the most brilliant and generous Torah builders of his time. With his brothers, revered by the frum world, they created and supported an infrastructure of schools, yeshivos, botei knesses, kollelim and other institutions, locally and all over the world, which will last for many generations.

He is survived by a large family of bnei and bnos Torah, talmidei chachomim, marbitzei Torah and machzikei Torah, who follow in his footsteps.

The levaya will take place on Motzoei Shabbos, at 9 p.m., at Bais Yaakov, located at 15 Saranac Street.