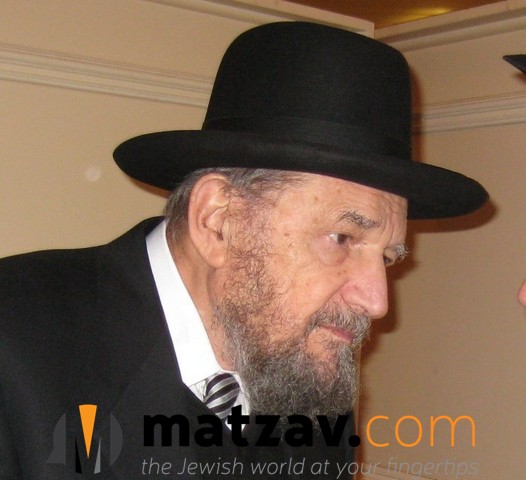 It is with great sadness that we report the passing of Reb Shlomo (Steven) Hill z”l of Monsey, NY. He was 94 years old. He passed away at Mt. Sinai Medical Center in New York City.

Reb Shlomo, born February 24, 1922, was a famed American film and television actor who later embraced Yiddishkeit and raised an upstanding family of bnei and bnos Torah.

Reb Shlomo was born as Solomon Krakovsky (Berg) in Seattle, Washington, to Russian immigrant parents. He served for four years in the United States Naval Reserve and in the 1950s moved to New York City to pursue an acting career.

He made his first Broadway stage appearance in Ben Hecht’s A Flag Is Born in 1946. He made his film debut in 1950 and then re-enlisted in the Navy in 1952 for two years. When he completed his service, he resumed his acting career.

A producer in the industry remarked that “Steven Hill [was] considered one of the finest actors America has ever produced.”

In 1967, as one of the few Orthodox Jewish actors working in Hollywood, he made it clear in advance of production that he was not able to work on Shabbos and that he would leave the film set every Friday before sundown.

“Steven was not only one of the truly great actors of his generation, he was one of the most intelligent people I have ever met. He is also the only actor I’ve known who consistently tried to cut his own lines,” series creator Dick Wolf said in a statement to the Associated Press.

One must comprehend how well-respected Reb Shlomo was in his field to comprehend the sacrifices he made to embrace his heritage. He was viewed as an unparalleled talent and was highly-regarded by fellow actors and producers. Despite the jeers and inevitable mocking, Reb Shlomo drew closer to his heritage in an inspiring display of gevuras hanefesh.

Reb Shlomo and his first wife, Selma Stern, were married in 1951 and had four children. He married his second wife, Rachel, in 1967 and they had five children.

Appearing in the play A Far Country in 1961 had a profound effect on Shlomo’s later life. In one scene, a patient screams at Reb Shlomo’s character, Sigmund Freud, “You are a Jew!” This caused Reb Shlomo to think about his religion.

“In the pause that followed,” he later recounted, “I would think, ‘What about this?’ I slowly became aware that there was something more profound going on in the world than just plays and movies and TV shows. I was provoked to explore my religion.”

Reb Shlomo was deeply inspired by the late Skverer Rebbe, Rav Yaakov Yosef Twersky zt”l, and he undertook a complete transformation of his life.

Reb Shlomo was a truly G-d-fearing oveid Hashem, who maintained a high-level of yiras Shomayim and dikduk b’mitzvos. He was a kind, humble, and endearing person, who left his fame and fortunes behind to live a Torah life and raise and outstanding family, who continue to impact their respective communities wherever they reside. His sage advice and continued advocacy for Torah-true Yiddishkeit will be sorely missed.

Reb Shlomo was a devoted mispallel of Khal Shaarei Tefillah in Monsey, which is led by Rav Yisroel Dovid Schlesinger.

Reb Shlomo was a beloved husband, father and zaide, and a friend to so many people. His passing is the end of a unique lifetime, one that continues to inspire many people. He is survived by his wife, four daughter and five sons, a brother and a sister, and many grandchildren.

The levayah will take place today at 2 p.m. at Khal Shaarei Tefillah, located at the corner of Highview Road and Nelson Road in Monsey, NY.