Rebbetzin Rosenblum was a daughter of Rav Yehuda Davis, one of America’s Torah pioneers, born and raised in Baltimore. Rav Davis learned in the great European yeshivos and, upon returning to America, established yeshivos in Baltimore, Brighton and later Mountaindale. Rav Davis was a fighter for authentic Yiddishkeit throughout his life and was never deterred by naysayers.

Rebbetzin’s Rosenblum’s shadchan was Rav Aharon Kotler zt”l, who redd her to his close talmid, Rav Avrohom Yosef Rosenblum zt”l, Born in the city of Antwerp, Belgium, in 1927, Rav Rosenblum grew up under the shadow of the Nazi occupation of Belgium and were separated from his parents on Erev Rosh Hashanah in 1941, never to see them again. Eventually, Rav Rosenblum went to learn in Yeshiva Eitz Chaim of Montreux, Switzerland, led by Rav Eliyahu Botchko zt”l, remaining in Switzerland until 1950.

Rav Rosenblum then immigrated to the United States, where he joined Bais Medrash Govoah in Lakewood at age 23, becoming a prime talmid of Rav Aharon Kotler.

Rav Rosenblum learned in yeshiva on the day of his chasunah and traveled from Lakewood to New York together with other attendees for the simcha. The mesader kiddushin was Rav Aharon.

During their more than sixty years of marriage, Rebbetzin Rosenblum was an equal partner in her husband’s learning. She was moser nefesh for his learning and for his harbotzas Torah. She made her home a reshus harabbim, a public thoroughfare. Throngs came daily to consult with the rosh yeshiva. To her, his learning was kodesh kodoshim and she would not interrupt his learning even at great personal cost. She invested heart and soul into raising their sixteen children in a small apartment, making do with very little.

The rebbetzin saw to the details of arranging the weddings of all of their children, contacting the halls and the caterers and tending to all of the other details so that her husband could engage in his learning and harbotzas Torah without worry. Rav Rosenblum always had a tremendous sense of gratitude to her for all that she did and deemed her an equal partner in everything he accomplished.

A few years after their wedding, Rav Rosenblum accepted a position as mashgiach at Yeshiva Shaarei Yosher in Brooklyn headed by Rav Yitzchok Dov Koppelman. For the first couple of years, the Rosenblums lived in Lakewood, traveling to New York at the beginning of the week and returning for Shabbos. Eventually, they moved to Boro Park. About five years later, Rav Koppelman was invited to Switzerland to head the Yeshiva of Lucerne. He left the yeshiva in the hands of Rav Rosenblum, who became rosh yeshiva, a post he held for the next fifty-five years.

The levayah will be held at 10:30 a.m. at Yeshivas Shaarei Yosher, located at 4102 16th Avenue in Boro Park, Brooklyn, followed by kevurah at the Vizhnitzer Bais Hachaim in Monsey, NY. 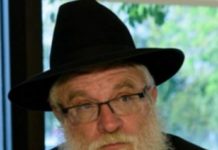