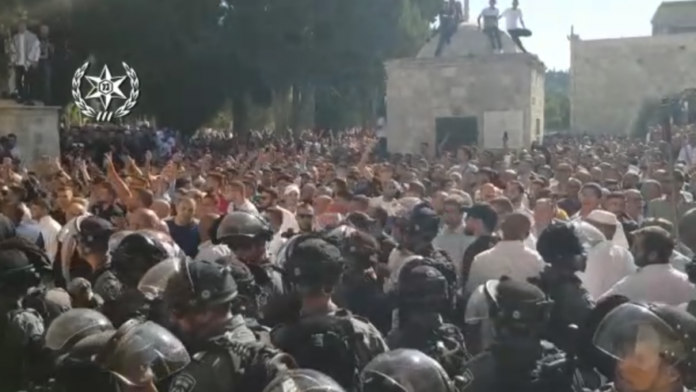 Riots erupted on the Temple Mount today, the fast of Tisha B’Av, as Muslims celebrating Eid al-Adha (“Festival of Sacrifice”) attempted to prevent Jews from entering. Police ultimately pushed back against the protesters to allow a record-breaking number of Jews to visit the site.

Hundreds of Jews lined up to visit the Har Habayis on the morning of Tisha B’Av. However, local Islamic authorities on Friday had urged Muslims to converge on the site on Sunday in the hope of preventing Jews from praying there.

“This decision comes after the organizations of the alleged Temple requested the occupation government to allow Jews to break into Al-Aqsa during Eid,” the Higher Islamic Commission, the Council for Wakf and Islamic Affairs and the Supreme Council of Fatwa said in a joint statement on Friday.

Mufti of Jerusalem Sheikh Mohamed Hussein also announced Friday that the Eid prayers in Al-Aqsa would be delayed for an hour, to start at 7:30 a.m. instead of 6:30 a.m. on Sunday, with the aim of hindering Jewish access to the site.

Indeed, on Sunday morning some of the 80,000 Muslim worshippers confronted police on the Temple Mount, causing them to close the site to Jews, citing security concerns.

“A special assessment was conducted by the Jerusalem district commander, and eventually it was decided that, given the … high friction potential, visits to the Temple Mount would not be possible at this time,” the Jerusalem District Police Spokesperson’s Unit announced in the morning.

Right-wing politicians and influencers decried the closure, calling on Prime Minister Benjamin Netanyahu to reverse it.

United Right Party leader Ayelet Shaked told Army Radio that it is “important on this day for Jews to enter the area,” while former Jerusalem mayor MK Nir Barkat praised police for “appropriate” consideration for Muslim worshippers but said “we must continue to allow Jews to ascent the Temple Mount. Exercise your authority and do not capitulate to violence.”

Senior United Right MK Transportation Minister Bezalel Smotrich criticized the move, saying, “The decision to capitulate to Arab terrorism and violence at the holiest place for the Jewish people is the root of the loss off deterrence in other areas.”

“The gate was supposed to open at 7:30 [a.m.] but the police [are] showing weakness and fear, and [have] not yet announced whether to open the gate to Jewish ‘visitors’ for fear of rioting by ‘local’ Muslims,” tweeted Maariv newspaper’s Avishai Grinzaig. “In doing so, the police [show] the world that terrorism pays off and … also [show] who really controls the mount. (Clue to the puzzle: Not us).”

According to Army Radio, Netanyahu said in response that he was in favor of allowing access to Jews, but left the decision in the hands of the Israel Police. His office indicated that Netanyahu had issued no closure.

Police responded to the violence by utilizing riot control measures to end the protests. Reports indicate that the head of the Jerusalem Islamic Wakf was injured during the incident, as well as an estimated 14 Muslim worshippers and four police officers.

At 10:30 a.m., police authorized Jews to enter the Temple Mount in small groups. The worshippers were under close police escort and limited to a very small area, but some reported that police appeared to be more accommodating than usual, allowing them to pray openly and performing security checks less stringently.

Despite the limited Jewish access, Arabs at the site began chanting “Allahu Akbar!” and throwing chairs and other objects at them for the hour during which police held the site open to Jews. A video Sunday showed Waqf director Azzam al-Khatib and Mufti of Jerusalem Muhammad Hussein encouraging the angry crowd, telling them: “In spirit and blood we will redeem you!”

At approximately 11:30 a.m., the site was closed to Jews, but reopened again in the afternoon for one more hour.

Regular visitors to the site noted that the closure time is usually 11 a.m., but said police held the site open an extra half hour due to the Wakf incitement.

Last year, some 1,400 Jews ascended to the Temple Mount for Tisha B’Av, a record number. However, this year, despite the violence and concerns that Jews would not be given access, over 1,700 Jews ultimately paid their respects at the holiest site to the Jewish people.

While Israeli authorities have traditionally shown deference to Muslim holidays on the Temple Mount, this Tisha B’Av was different, said Israeli tour guide and Temple Mount enthusiast Shlomo Meir, who was able to visit the site on Sunday.

“This Tisha B’Av’s display of support for Jewish worshippers, like the effort the police made to allow us to go up to the Temple Mount during Jerusalem Day this year—which coincided with the last two days of Ramadan—shows that the Israel Police are really beginning to protect Jewish rights here, with the backing of Israel’s government,” said Meir.

He noted that previous years had seen a total closure of the Temple Mount during the last two days of Ramadan, considered the holiest of that holiday. JNS.ORG