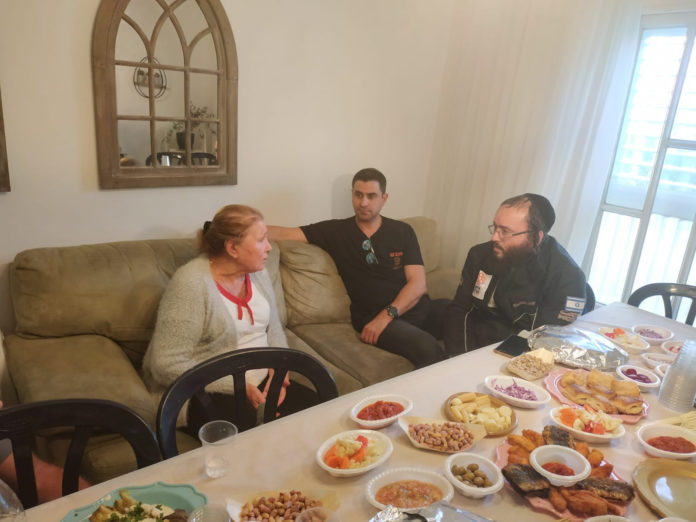 Allegra Ben Akan a resident of Kiryat Gat suffered a full system trauma injury from a rocket that was fired by Hamas militants at Israel during the last round of missile attacks from the Gaza Strip. On Thursday, she met the EMTs who were the first responders at the scene, provided her with medical treatment, and saved her life.

Allegra underwent three months of treatments and rehabilitation following the injury. She then returned home where she requested to meet the volunteers who were the first to respond to the emergency and saved her life.

The incident took place on Shabbat afternoon when the warning siren sounded alerting residents of the city that rockets were headed in their direction. Allegra ran for shelter but did not make it to her safe room in time. She was on the way home when the rocket struck near her location on Malchei Yisrael Street. The shockwave and shrapnel from the rocket caused her injuries and she was listed as being in critical condition.

United Hatzalah Volunteer EMTs Yankee Weinberg and Itzik Assoulin who live nearby were the first responders at the scene that day and immediately began treating Allegra for her injuries. The first ambulance on the scene arrived a number of minutes after the two had begun treating Allegra’s wounds and quickly transported her to the hospital.

“We were proud to be able to help Allegra in her time of need,” said Weinberg who runs the United Hatzalah chapter of Kiryat Gat. “We came to help her but it was really from heaven that we were in the area when the missile attack occurred and that we were able to save her life. So many things could have happened that would have made this situation end differently. Thank God you are alive and recuperating now.,” He told Allegra. “Seeing how Allegra has recovered thus far and knowing that she is on the road to a full recovery makes us ecstatic and gives us the strength to keep on responding to emergencies time and again.”

Weinberg answered her and told her that “Our thanks is seeing you here today alive.”