A group of Billionaires’ Row residents are taking their battle with Mayor Bill de Blasio over a homeless shelter planned for their block someplace where the presidential wannabe might actually notice: Iowa.

“Hey, Bill de Blasio! It’s New York … Remember Us?” asks the first of 10 eventual billboards going up Thursday in the key battleground state — where the mayor has seemingly spent more time this year than his own city.

“He’s the mayor of our city. He should devote his time to listening to the people of New York City,” said Michael Fisher, a member of the West 58th Street Coalition who says that the group has been trying for years to score face time with de Blasio over the controversial plan to convert the block’s old Park Savoy Hotel to a homeless shelter.

“We’re going to run these billboards all over the state, and we’re going to run them until the mayor actually has a meeting with us,” said Fisher, explaining that one billboard will go up Thursday in downtown Cedar Rapids, with at least nine more to dot the Hawkeye State starting next week. “He doesn’t like listening to his constituents.” 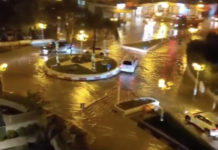