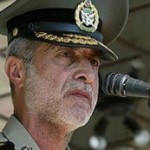 The commander-in-chief of the Iranian Army expressed his country’s eagerness for a military confrontation with Israel, and readiness to destroy the Jewish state sooner than the 25-year projection recently set forth by Supreme Leader Ali Khamenei, the regime-aligned Tasnim News Agency reported.

In a speech during “Sacred Defense Week,” Iran’s annual commemoration of its 8-year war with Iraq, Major General Ataollah Salehi vowed, “We will annihilate Israel for sure.”

“We are also eager that Israel take (military) action against us sooner, so that we could mark its destruction earlier than the 25 years that has been pledged,” he added.

Salehi also claimed that by destroying the Jewish state, Iran would be ridding the United States of Israeli influence.

Earlier this month, Iranian Supreme Leader Ali Khamenei issued renewed threats against Israel, pledging that the Islamic Republic would ensure the Jewish state would no longer exist in 25 years, and warning that, in the meantime, Iran and its proxies would not grant Israel a moment of peace or security.

“[W]e tell them [Israel] that you will basically not witness the 25 years from now, and by God’s grace, nothing called the Zionist regime will exist in the region ,” Khamenei said on September 9.