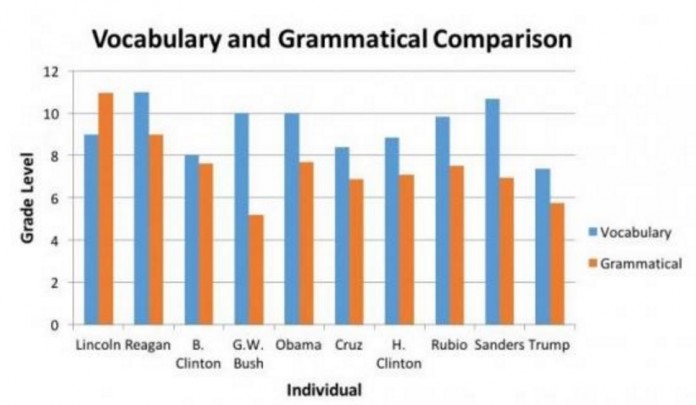 The grammar used by Donald Trump in his speeches as he campaigns to become the Republican presidential candidate corresponds to that used by students aged 11 and under, reports THE INDEPENDENT.

The 69-year-old businessman’s language tailed his counterparts. Ted Cruz and Marco Rubio – although he has now dropped out of the race – both used grammar corresponding to children aged between 11 and 14 – students between grades six and eight in the US.

But their vocabulary was more advanced and matched students aged between 13 and 16.

THE INDEPENDENT reports that in the study, ‘A Readability Analysis of Campaign Speeches from the 2016 US Presidential Campaign’, researchers from Carnegie Mellon University’s Language Technologies Institute (LTI) wanted to establish the reading level of the candidates’ speeches. They analysed a number of transcripts for each candidate, including campaign trail speeches, victory speeches and defeat speeches.

They found that the Democratic presidential candidates also used grammar typical of students aged between 11 and 14.

But the vocabulary used by Bernie Sanders was more advanced than that used by Hillary Clinton. The 74-year-old Vermont senator uses words similar to those used by students aged between 15 and 18.

The researchers also compared the speeches of the current presidential candidates to past leaders. The historical review showed the language used by Abraham Lincoln, the US president from 1861 to 1865, and Ronald Reagan, who led from 1981 to 1989, was more advanced.

Read more at THE INDEPENDENT.