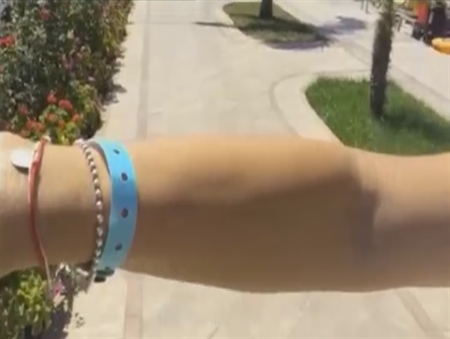 Israeli visitors are tagged differently from other guests at a five-star resort in Rhodes, Greece Israel’s Channel 10 reported on Sunday.

According to the report, the plastic wrist bands given to guests at the Imperial Hotel – to enable them unlimited entrance to the spa and other facilities – are color-coded (in blue) only for customers from the Jewish state.

When asked about this procedure, a representative of the hotel told the network’s Orly Vilnai and Guy Meroz that the colors simply identify the country of the guest’s origin. However, an investigation into the matter by the TV duo revealed that this was not the case – and that only Israelis were given a specific color to wear, while tourists from various European countries were given bracelets of all colors.

An Israeli airline adviser said he was unaware of this practice.

“When it happens and everyone keeps quiet, nothing changes,” said Yehuda Zafrani. “This story has to be told.”

According to Channel 10, hotels in the southern Israeli resort town of Eilat also distribute different-colored wrist bands to guests, but only according to the date of their arrival at the hotel.

At Israel’s International Tourism Fair in February this year, Rhodes Tourism Deputy Mayor Marisa Chatzilazarou called her country “the favorite destination of Israelis,” claiming that in 2015 alone, 102,705 Israelis visited the island. Israel, according to data revealed at the tourism fair, is Rhodes’ 5th largest tourism market, surpassed only by England, Germany, Sweden and Russia.

It takes approximately an hour and a half to fly from Tel Aviv to Rhodes.