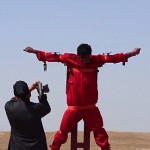 The Syrian Observatory for Human Rights can document the execution of 91 people in Syria between July 29 and August 29 by Islamic State.
Those executed include 32 civilians, including 2 women; 39 of its own militants, including a journalist; 11 fighters from the rebel and Islamist factions; and at least 9 members from regime forces and allied militiamen, most of them beheaded.