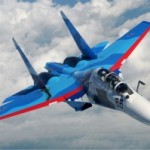 This, explained the official, is to prevent problems identifying planes flying over Syrian airspace, where operations on the part of the U.S., Russia, Syria and Israel are currently taking place.

Meanwhile, according to a report in the Israeli news site, Mako, Netanyahu’s visit to the Kremlin, to impress upon Putin the danger that Russian military involvement in the Syrian civil war poses to Israel – as additional heavy weaponry could fall into the hands of Hezbollah and other terrorist organizations – is coinciding with the release of satellite photos reinforcing Israeli fears.

The photos show Russian Sukhoi-30 combat jets in the airstrip of the Syrian Army in Latakia.

The Israeli defense official told Walla that Netanyahu’s meeting with his Russian counterpart will include setting guidelines for their country’s respective armies, as they pertain to operations in Syria.

“The goal is to reach a high level of understanding between Israel and Russia, which takes on a more concrete meaning in the field than when discussed by the leadership. Ultimately, [working this out] is in the interest of both sides,” he told Walla.