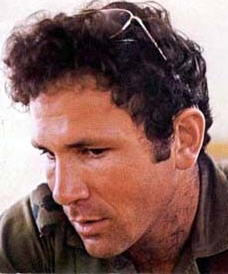 According to the report, the PM listened to the tapes — released by the Defense Ministry — of walkie-talkie communications with Yossi Ben Hanan, an IDF officer whose life was saved by Yoni during a battle with Syrian forces in the Golan Heights.

During the fighting, Ben Hanan was seriously wounded behind enemy lines, and Yoni Netanyahu — a Sayeret Matkal officer — headed the rescue mission to extricate him. This was less than three years before Yoni would be killed during the famous July 1976 raid to rescue Israeli and Jewish Air France passengers held hostage in Entebbe.

For his part in the rescue of Ben Hanan, Yoni was awarded the IDF Medal of Distinguished Service. Ben-Hanan received a Medal of Valor for his role in the battle that Walla described as “one of the fiercest” of the war.

The tapes include the four hours on October 12, 1973, during which Ben Hanan, a battalion tank commander, lay bleeding, until his rescue by Yoni and his men.

As Netanyahu and Ben Hanan listened to the recordings together, the prime minister said he barely recognized his brother’s voice, due to the distorted sounds of the instrument. However, he told Ben Hanan,“His clarity and sharpness are clear.”

Among the conversations heard are those between well-known, now deceased Israeli military greats, such as Yanush Ben-Gal and Rafael Eitan, discussing the best way to perform the rescue operation and back-and-forth exchanges with Yoni.

“It’s like receiving a message from the past,” Netanyahu told Walla, which documented the emotional meeting with Ben Hanan.

Ben Hanan, now 71, said he owes his life to Yoni, who not only saved him, but gave him the long-range two-way radio that enabled communications after he was wounded. He also told a story that Netanyahu was hearing for the first time.

“There was a moment I recall that wasn’t recorded,” he told the PM. “It was the moment that Yoni and his men arrived, and I told them, ‘Careful, there’s shooting here.’ And Yoni said to me, ‘Yossi, relax, I’m in charge now.’”

Ben-Hanan, who named his daughter Yoni, said, “I think about that event almost every day.”

Ben Hanan accompanied Netanyahu on his historic trip to Africa over the summer to mark the 40th anniversary of “Operation Thunderbolt,” the official name of the Entebbe raid, which later became known as “Operation Yonatan.”

Walla said that each time Netanyahu heard Yoni’s voice on the tapes, he appeared to be “yearning for one more sentence, one more word” out of the mouth of the brother he so loved and admired.

Netanyahu recalled being 12 and asking Yoni (who was hanging out with him and their younger brother, Iddo), “Tell me, if you were in the desert with another person and you only had one water flask, which could save only one of you, would you drink it or give it to the other guy?”

Netanyahu said that Yoni answered: “That depends. If it’s Iddo, I’d let him have it.”

“And we totally believed that,” Netanyahu told Walla. He then turned to Ben Hanan and said, “So in this case, that guy was you.”

According to Walla, this was the second time in the past two years that Netanyahu received declassified recordings of his brother. In May 2014, he heard a tape, including Yoni’s voice, from a rescue operation to save Israeli POWs from Syrian captivity during the War of Attrition, fighting against Israel by Egypt, Jordan, the PLO and their allies for the three years following the 1967 Six-Day War.

The Yom Kippur War (Oct. 6-25, 1973) was launched against Israel on the holiest day in Judaism by a coalition of Arab states led by Egypt and Syria. Israelis were caught by surprise, with much of the country’s population fasting and in shul.