President Barack Obama doesn’t go anywhere without his TelePrompter. The textbook-sized panes of glass holding the president’s prepared remarks follow him wherever he speaks. Resting on top of a tall, narrow pole, they flank his podium during speeches in the White House’s stately parlors. They stood next to him on the floor of a manufacturing plant in Indiana as he pitched his economic stimulus plan. They traveled to the Department of Transportation this week and were in the Capitol Rotunda last month when he paid tribute to Abraham Lincoln in six-minute prepared remarks.Obama’s reliance on the teleprompter is unusual – not only because he is famous for his oratory, but because no other president has used one so consistently and at so many events, large and small.

After the teleprompter malfunctioned a few times last summer and Obama delivered some less-than-soaring speeches, reports surfaced that he was training to wean himself off of the device while on vacation in Hawaii. But no such luck. 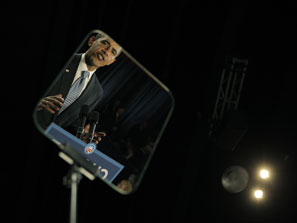 His use of the teleprompter makes work tricky for the television crews and photographers trying to capture an image of the president announcing a new Cabinet secretary or housing plan without a pane of glass blocking his face. And it is a startling sight to see such sleek, modern technology set against the mahogany doors and Bohemian crystal chandeliers in the East Room or the marble columns of the Grand Foyer.

“It’s just something presidents haven’t done,” said Martha Joynt Kumar, a presidential historian who has held court in the White House since December 1975. “It’s jarring to the eye. In a way, it stands in the middle between the audience and the president because his eye is on the teleprompter.”

Just how much of a crutch the teleprompter has become for Obama was on sharp display during his latest commerce secretary announcement. The president spoke from a teleprompter in the ornate Indian Treaty Room for a few minutes. Then Gov. Gary Locke stepped to the podium and pulled out a piece of paper for reference.

The president’s teleprompter also elicited some uncomfortable laughter after he announced Kansas Gov. Kathleen Sebelius as his choice for Health and Human Services secretary. “Kathy,” Obama said, turning the podium over to Sebelius, who waited at the microphone for an awkward few seconds while the teleprompters were lowered to the floor and the television cameras rolled.

Obama has relied on a teleprompter through even the shortest announcements and when repeating the same lines on his economic stimulus plan that he’s been saying for months – whereas past presidents have mostly worked off of notes on the podium except during major speeches, such as the State of the Union.