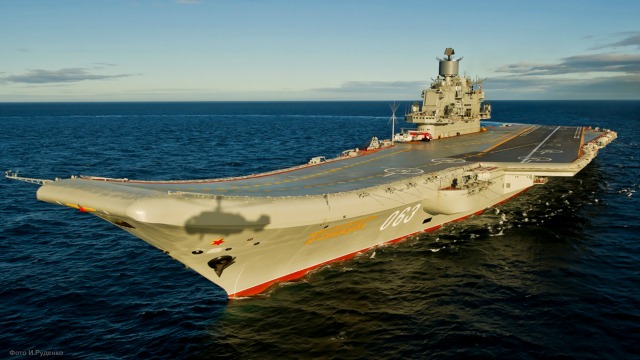 The impending arrival of Russia’s sole aircraft carrier — the Admiral Kuznetsov — off the coast of Syria has the Israeli defense establishment concerned, the Hebrew news site Walla reports.

Israeli defense officials and senior IDF officers told Walla that the Admiral Kuznetsov’s presence in the eastern Mediterranean Sea will limit the Israeli military’s ability to act — both openly and covertly — in Syria and Lebanon.

In recent years, Israel has reportedly carried out a number of airstrikes in Syria to prevent to transfer of advanced Iranian weaponry to the Lebanese Shiite terrorist group Hezbollah.

On Friday, the Admiral Kuznetsov was among a group of Russian warships pictured off the coast of Great Britain as they made their way to the eastern Mediterranean, where they are expected to take part in the Russian military’s effort to defeat rebel groups who seeking to topple Syrian President Bashar Assad’s regime.

According to the Walla report, the Admiral Kuznetsov — with a crew of around 2,000 sailors and dozens of fighter jets and helicopters — will reach the Syrian coast within a week.

The report said that the coordination mechanism set up by the Israeli and Russian militaries to avoid unnecessary friction following Russia’s entry into the Syria fray last year has weakened in recent months — as evidenced, for example, by a July incident in which a Russian drone entered Israeli airspace and an IDF attempt to shoot it down failed before it flew back across the border into Syria.

Israeli Prime Minister Benjamin Netanyahu has met with Russian President Vladmir Putin four times since the Russian military intervention in Syria began last year and the two have also spoken by phone on numerous other occasions.

As it appears the Russian military plans to be in Syria for the long-haul, and with Assad’s military equipping itself with state-of-the-art defensive systems, Israel is realizing that it must recalculate its strategy in the northern theater, the Walla report said.