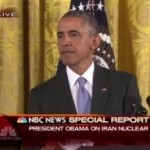 The issue specifically rests in a provision in an ancillary document to the Joint Comprehensive Plan of Action — as the 159-page document comprising the nuclear deal between Iran and world powers is formally known — that allows the foreign subsidiaries of U.S. individuals or companies to conduct business in Iran.

According to the Fox report, this blatantly violates other federal laws prohibiting precisely these foreign subsidiaries from doing business with Iran as long as it continues to remain a designate state sponsor of terrorism, which it is, along with Syria and North Korea.

And, actually, the very law prohibiting such business which the Obama administration has agreed to allow was proscribed by the president himself, in the Iran Threat Reduction and Syria Human Rights Act (ITRA), signed into law in 2012. The law states that what is prohibited for U.S. individuals and firms — namely, doing business with Iranian interests — is also illegal for their foreign subsidiaries.

Either the president can treat these foreign subsidies as different than their parent companies, which would violate the previous ITRA, or it could treat both the parent and subsidiary as the same, which would also violate the ITRA as long as Iran remains a designated state sponsor of terrorism.

So, for this provision of the JCPOA to be implemented, the president will have to waive federal laws he ratified in the first place, creating yet another potential legal headache for the White House over its nuclear deal with Iran and, more likely, continuing to dissuade U.S. businesses from approaching the Islamic Republic.

According to legal analysts within and without the administration speaking to Fox, because the JCPOA is an executive order and not a treaty, which was neither official nor symbolically approved by congress, it makes it much more open to legal challenges.