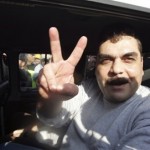 Lebanese terrorist Samir Kuntar had been planning a major terror attack against Israel in the Golan Heights area just before his elimination, Yediot Acharonot reports Sunday, based on “the most reliable Western sources,” Arutz Sheva reports.

Kuntar had established himself over the past year as a “ticking time bomb” and independent source of terror attacks against Israel, the sources stated, noting that both Israelis and sources in the Arab world confirmed this information from their viewpoints.

According to those same sources, Kuntar has not been associated with Hezbollah for some time now – instead, operating under even more extreme groups, dubbed the Syrian National Defense Committees.

Kantar is notorious for the 1979 murder of three Israelis, including 31-year-old Danny Haran, and his four-year-old daughter.

He was freed by Israel as part of a prisoner swap in 2008, three decades after the murders, and he became a high-profile figure in the Lebanese Shiite terror group Hezbollah.