A year-long investigation by the Investigative Project on Terrorism (IPT) has found that scores of known radical Islamists made hundreds of visits to the Obama White House, meeting with top administration officials.

Court documents and other records have identified many of these visitors as belonging to groups serving as fronts for the Muslim Brotherhood, Hamas and other Islamic militant organizations.

The IPT made the discovery combing through millions of White House visitor log entries. IPT compared the visitors’ names with lists of known radical Islamists. Among the visitors were officials representing groups which have:

Been designated by the Department of Justice as unindicted co-conspirators in terrorist trials; Extolled Islamic terrorist groups including Hamas and Hizballah;
Obstructed terrorist investigations by instructing their followers not to cooperate with law enforcement;
Promoted the incendiary conspiratorial allegation that the United States is engaged in a “war against Islam”- a leading tool in recruiting Muslims to carry out acts of terror;
Repeatedly claimed that many of the Islamic terrorists convicted since 9-11 were framed by the U.S government as part of an anti-Muslim profiling campaign.
Individuals from the Council on American-Islamic Relations (CAIR) visited the White House at least 20 times starting in 2009. In 2008, CAIR was listed as an unindicted co-conspirator in the largest terrorist money laundering case in U.S. history – the trial of the Holy Land Foundation in which five HLF officials were convicted of funneling money to Hamas.

U.S. District Court Judge Jorge Solis later ruled that, “The Government has produced ample evidence to establish the association” of CAIR to Hamas, upholding their designations as unindicted co-conspirators. In 2008, the FBI formally ended all contact with CAIR because of its ties to Hamas.

In January 2004, Hussam Ayloush, executive director of CAIR’s Los Angeles office, publicly defended Palestinian terror attacks in comments before Muslim students at the University of California – Los Angeles, saying that terrorists were exercising their “legitimate right” to defend themselves against Israeli occupation.

Ayloush, who was a delegate to the 2012 Democratic National Convention in Charlotte, N.C., casts the United States as controlled by Israeli interests. At a 2008 CAIR banquet in San Diego, he imagined “an America that respects and humanizes religion. It’s an America that is free to act on its values and not on the interests of any foreign lobby.” In 2004, he said that the war on terror had become a “war on Muslims.” Ayloush attended at least two White House meetings.

According to reliable sources, Monteiro was White House liaison for secret contacts with CAIR, especially with Ayloush. IPT has learned that the White House logs curiously have omitted Ayloush’s three meetings with two other senior White House officials.

Law enforcement first noticed Safi in 1995 when his voice was captured in an FBI wiretap of now-convicted Palestinian Islamic Jihad leader Sami Al-Arian. At the time of his conversation with Al-Arian, Safi served as executive director of the International Institute of Islamic Thought, an organization listed in law-enforcement and in internal Muslim Brotherhood documents as one of the movement’s top front groups in North America.

Safi also wrote for the Middle East Affairs Journal, produced by the United Association for Studies and Research (UASR). That group was established by Hamas deputy political leader Mousa Abu Marzook and part of the Hamas-support network called the “Palestine Committee.”

Safi has repeatedly expressed understanding for the underlying causes that provoke terrorism: “Terrorism cannot be fought by…ignoring its root causes. The first step…is to examine the conditions that give rise to the anger, frustration, and desperation that fuel all terrorist acts.” He also called Palestinian terrorists “freedom” fighters.

In 2000, Omeish personally hired the late terrorist Anwar al-Awlaki to be the imam of Falls Church, VA, Dar al-Hijrah mosque. According to IPT analysis, more terrorists have been linked to Dar al-Hijrah since 9/11 than to any other mosque in America. 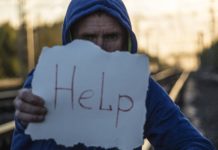