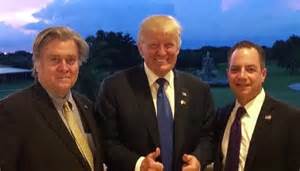 President Trump may be getting ready to expand his recent in-house shakeups to include Chief of Staff Reince Priebus and controversial chief strategist Steve Bannon. A report in Axios on Friday morning states the commander in chief in considering House Majority Leader Kevin McCarthy (R-CA), among others, to replace Priebus. Sources in the story called the situation “fluid.” One said, “Things are happening, but it’s very unclear the president’s willing to pull that trigger.”

Others in line to replace Priebus include Wayne Berman of Blackstone Group, David Urban of the Washington advisory firm American Continental Group, and Gary Cohn, Trump’s economic adviser and an ex Goldman Sachs executive. Reports have been flying out of the West Wing about Bannon’s potential departure since he was removed from the National Security Council’s principals committee. He’s called such reports “100 percent nonsense.” Read more at AXIOS.