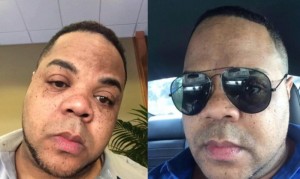 [Update below.] The man suspected of killing 2 Virginia journalists during live broadcast has killed himself, reports the CBS affiliate where the journalists worked.

Suspected gunman in the murders of WDBJ reporter Alison Parker and her cameraman, Adam Ward, during a live morning broadcast outside Roanoke, reportedly has shot himself and is in critical condition. The gunman, identified as Vester Lee Flanagan, 41, was a former station employee who went by the on-air name ‘Bryce Williams,’ the AP reports.

ABC News says it received a fax from someone who claimed to be Bryce Williams, a person on the staff at the Virginia station that saw two employees fatally shot on air, reports the AP.

ABC News says on its website that sometime between Tuesday night and Wednesday morning, it received the fax. It describes it as a lengthy document of 23 pages. ABC News says it has turned the document over to authorities. ABC News did not offer any other details.