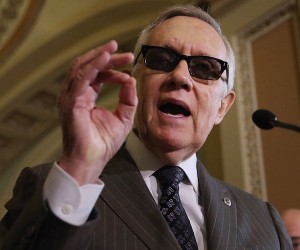 Senate Minority Leader Harry Reid (D-NV) twice this year sought a commitment from President Barack Obama that he would veto any U.N. resolution calling for the establishment of an independent Palestinian state, only to be rebuffed on both occasions, Politico reported on Thursday.

Reid, a close congressional ally of the president’s, submitted his requests for Obama to commit to exercising the United States’ veto power at the U.N. Security Council through White House Chief of Staff Denis McDonough.

McDonough responded that the White House “would look into it,” according to a reliable source cited by Politico, but in the end took no action.

According to the report, Reid made the requests as he was attempting to line up support from the Democratic Party for the Iran nuclear deal, known as the Joint Comprehensive Plan of Action (JCPOA). Politico explained: “If Obama explicitly sided with Israel against the possible U.N. resolution, Reid’s thinking went, it would give nervous Democrats cover to back the Iran deal, which Israeli Prime Minister Benjamin Netanyahu vocally protested.”

According to Politico, both Reid’s repeated requests and Obama’s unwillingness to make a statement on the matter were “confirmed by White House officials and Senate aides,” highlighting the wide gulf between the Obama administration and the Netanyahu government.

Obama’s lack of public commitment to a veto follows a series of statements issued by White House and State Department officials hinting at a change in U.S. policy on the Israeli-Palestinian conflict. This comes in the wake of Netanyahu’s assertion in March that a Palestinian state would not likely come into being during his current term, due to the massive upheavals occurring in the region.

Despite Netanyahu’s repeated clarification that his remark did not mean he was no longer committed to the two-state solution, the White House said it was reassessing its position on blocking a potential Security Council resolution.

“The steps that the United States has taken at the United Nations had been predicated on this idea that the two-state solution is the best outcome,” White House spokesman Josh Earnest said on March 19. “Now our ally in these talks has said that they are no longer committed to that solution. That means we need to reevaluate our position in this matter.”

Later in June, in a hearing before the House Foreign Affairs Committee, U.S. Ambassador to the United Nations Samantha Power declined to commit to blocking a resolution calling for the establishment of a Palestinian state.