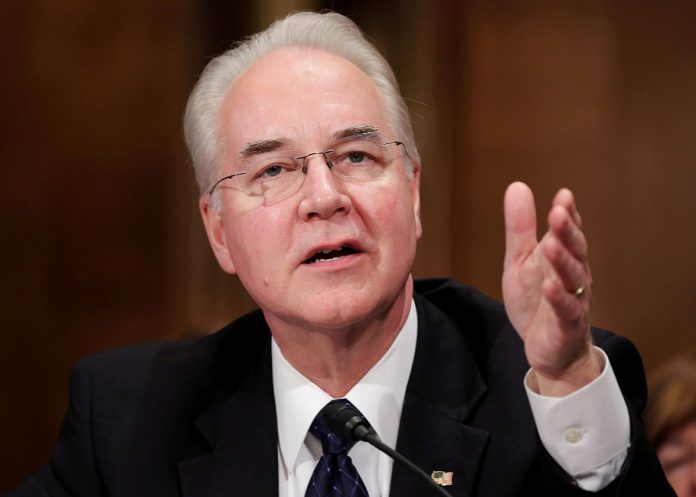 As Health and Human Services Secretary Tom Price walked through a hallway Tuesday in the West Virginia State Capitol, veteran reporter Dan Heyman followed alongside him, holding up his phone to Price while attempting to ask him a question.

Heyman, a journalist with Public News Service, repeatedly asked the secretary whether domestic violence would be considered a preexisting condition under the Republican bill to overhaul the nation’s health care system, he said.

“He didn’t say anything,” Heyman said later in a news conference. “So I persisted.”

Then, an officer in the Capitol pulled him aside, handcuffed him and arrested him. Heyman was jailed on the charge of “Willful Disruption of State Government Processes” and was released later on $5,000 bail.

Authorities said while Secret Service agents were providing security in the Capitol for Price and Kellyanne Conway, special counsel to the president, Heyman was “aggressively breaching” the agents to the point where they were “forced to remove him a couple of times from the area,” according to a criminal complaint.

Heyman “was causing a disturbance by yelling questions at Ms. Conway and Secretary Price,” the complaint stated.

But Heyman insists he was simply fulfilling his role as a journalist, and feels that his arrest sets a “terrible example” for members of the press seeking answers to questions.

Price and Conway were visiting Charleston, W.Va., to hear about efforts to fight opioid addiction in a state that has the nation’s highest drug overdose death rate. They met privately with state and local policymakers and members of several groups, including officials of an addiction treatment center and an addiction hotline, according to the Associated Press.

Before Heyman’s arrest, no police officer told him he was in the wrong place, Heyman said. He was wearing a press pass as well as a shirt with a Public News Service logo on the front, and identified himself to police as a reporter, he said.

At the news conference, Heyman’s lawyer called the arrest a “highly unusual case” and said he has never had a client arrested for “talking too loud.” The lawyer, Tim DiPiero, described Heyman as a mild-mannered, reputable journalist and called the arrest “bizarre” and “way over the top.”

Heyman has worked as a reporter for about 30 years, and his stories have appeared in the New York Times, NPR and other national news outlets, he said. Since 2009, he has worked as a West Virginia-based producer and reporter for Public News Service, a nonprofit news service that provides content to media outlets while also publishing its own stories.

“From what we can understand, he did nothing out of the ordinary,” Corbeil said in an interview with The Washington Post. “He was doing what any journalist would normally do, calling out a question and trying to get an answer.”

The American Civil Liberties Union of West Virginia said in a statement Heyman’s arrest constituted “a blatant attempt to chill an independent, free press.” It called the charges against Heyman “outrageous” and demanded they be dropped immediately.

“This a dangerous time in our country,” the statement read. “Freedom of the press is being eroded every day.”

“Today was a dark day for democracy,” the ACLU of West Virginia added. “But the rule of law will prevail. The First Amendment will prevail.”

Heyman said he has been reporting on health care issues for many years, calling it “well-trodden ground” in his coverage. As a veteran journalist, he is used to criticism, he said, but he has never heard of a reporter being arrested for asking a question. Heyman said he feels the public relies on journalists aggressively “pursuing the truth.”

“If they don’t like the stories I write, that’s fine,” Heyman said. “They can criticize me all they want.”

“But just saying that I shouldn’t be able to do my job is a bit ridiculous,” he added.