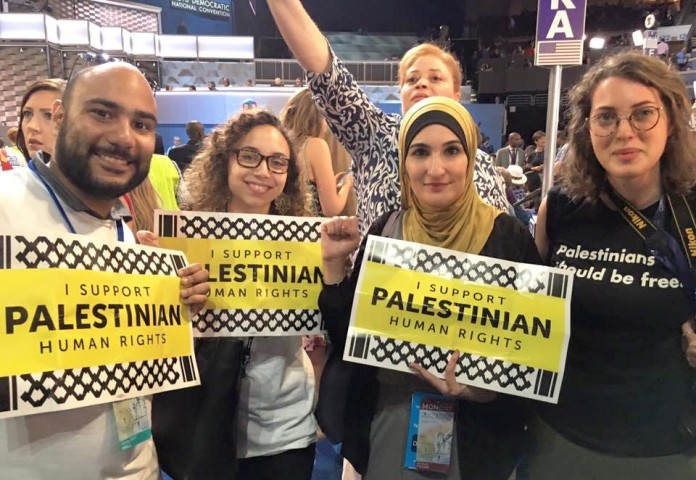 Palestinian flags were prominently displayed by activists at the Democratic National Convention (DNC) this week, amid an apparent lack of American flags, according to numerous media and social media postings.

Eye-witness accounts and press coverage of the first day of the DNC pointed out the limited presence of Old Glory.

According to Daily Caller reporter Alex Pfeiffer, “It doesn’t look like there are any American flags. The stage is bland and grey, with no red, white or blue present. A thorough look at the crowd present also turns up no American flags.”

Twitter users credited activist Ali Akin Kurnaz for initially raising the Palestinian flag at the Democratic Party confab. Kurnaz issued several tweets of his own during the first day of the event, criticizing the Democrats for what he claimed to be a pro-Israel stance.

Ali Akın Kurnaz @AliAkinK
Nothing disrespectful about holding the flag of an oppressed people. Not acknowledging their oppression—that’s disrespectful🇵🇸 #DemsInPhilly
9:04 PM – 25 Jul 2016

Conservative bloggers, meanwhile, highlighted additional flag issues during the DNC, such as the party’s capitulation to protesters demanding the removal of the Mississippi state flag, which depicts the Confederate standard. In a video capturing its removal, demonstrators are heard chanting and cheering.

Chris Pandolfo, writing in the Conservative Review, said that as “Democrats in Philadelphia participated in a ‘sit-in’ under the Mississippi state flag…Inside the convention delegates shamelessly waved the Palestinian flag without thinking twice. Oh, the stench of hypocrisy.”

The presence of the Palestinian flag at the DNC comes at a fragile time for pro-Israel Democrats, following major efforts — led by Vermont Senator Bernie Sanders, who competed against and lost to Hillary Clinton in the Democratic presidential primary — to take a “toughened” stance on Israel.