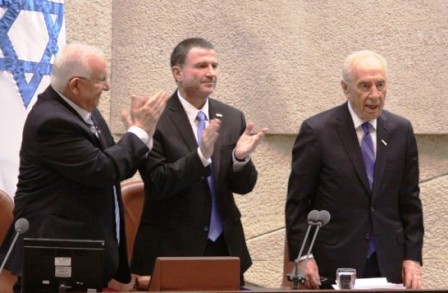 In a modest ceremony at the Knesset, under the shadow of the ongoing conflict in Gaza, Reuven Rivlin was sworn in as the tenth president of Israel today. Knesset Speaker MK Yuli Edelstein (Likud) chaired a special session of the parliament, which was attended by Prime Minister Bibi Netanyahu, MKs, and other dignitaries who filled the plenum and its galleries.

Rivlin, his right hand raised and his left on a Chumash, took his presidential vow. After covering his head with a yarmulke, the fresh president then recited the bracha of Shehecheyanu and shofros were blown to signal the start of his seven-year term in office.

“With this prayer, in awe and humility, on your behalf and at your command, I come to faithfully fulfill my role as tenth president of the State of Israel,” he declared.

In his initiation speech, Rivlin referred to the battles raging across the border with Gaza but stressed that Israel was not waging war against the Palestinian nation or Muslims.

“We are gathered here today with a very clear message to our enemies: You have not overcome us and you will not do so,” he said. “We are not fighting against the Palestinian people, and we are not at war with Islam; we are fighting against terrorism.”

Rivlin spoke to his hope that the future would bring peace for Israel and its neighbors.

Rivlin also thanked his predecessor Shimon Peres for being “the shepherd of our hopes, and the poet of a vision.”

“I want to thank you for a whole life, the life of a whole generation when you bore and continue to bear the burden of this nation,” he said.

Rivlin, having invited the mayors and local council heads of Israel’s rocket-battered southern communities, address each one by name as he began his address.

Earlier, at a small ceremony in his office, Edelstein presented Peres with a symbolic key to the Knesset and Rivlin with the Knesset speaker’s gavel, used to bring the plenum to order. Rivlin is a former speaker of the Knesset.

In his farewell speech, given before Rivlin’s swearing in, Peres gave his thanks for the opportunity to serve the country.

“There is no greater privilege,” he said.

Peres sharply criticized Hamas for initiating the current round of fighting in Gaza and accused it of using Palestinian civilians as human shields.

“Never has such a minority torn apart the fabric of whole societies,” he said, “so cruelly sent children to serve as shields for its crimes. Hamas has once again put hundreds of thousands of the citizens of Gaza in harm’s way, into a field of fire.”

Peres also lashed out at the United Nations Human Rights Council, which on Wednesday said it would investigate allegations of Israeli war crimes in Gaza.

“It is,” he said, “hard to fathom how a council that bears the words ‘human rights’ in its name decided to establish a committee to investigate who is right. Is it the murderers or those who refuse to be murdered?”

The outgoing president questioned the moral compass of demonstrators around the world who have turned out in their thousands to condemn Israel.

“It is difficult to understand how across the world in the streets and the squares protesters come out in support of terrorists and condemn those who defend themselves,” he lamented. “They hold signs aloft without providing an answer to terror. They encourage and incite violence.”

Turning to his successor, Peres wished Rivlin all the best during his term in office.

“I wish you success, that you should serve the nation in your positive way, as you already do,” he said, “with your great heart, with your face full of light. You already have what is expected from a president. I am sure you will succeed in our way and strengthen the future of the State of Israel.”

With a last look around at the hall, Peres’s last words as president were simple and to the point. “Thank you all from the bottom of my heart,” he said, drawing a standing ovation from the crowd.