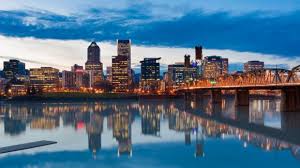 In a city splintered by protest, acrimony and the fresh pain of a pair of killings on a commuter train, demonstrators gathered again – and clashed again – here Sunday afternoon, with a right-wing rally drawing thousands of counter-protesters in the heart of downtown.

The planned, permitted free-speech and pro-President Donald Trump rally came just more than a week after 35-year-old Jeremy Christian – a man who performed Nazi salutes and screamed racial slurs at a recent right-wing rally here in late April – allegedly stabbed three men, killing two, following what witnesses said was a hate-filled tirade against two teenage girls on a train. The deceased, Rick Best, 53, and Taliesin Myrddin Namkai-Meche, 23, and one survivor, Micah Fletcher, were standing up to Christian as he harassed the girls, one of whom was wearing a hijab.

The slayings shocked the city and exposed the long-simmering racial tension here, with roots in Oregon’s establishment as a white utopia in the Pacific Northwest. At the train station where the two men were killed, a memorial of flowers, signs and messages of hope and sadness were scrawled in chalk, including this one: “Portland We Have to Do Better.”

Though drawing outrage and sympathy, the deaths in some ways only amplified the issue, again making Portland a magnet for the fight of political extremes.

Mat Dos Santos, legal director for the American Civil Liberties Union of Oregon, was in a television interview about the attacks last week when a man stood behind him performing a Nazi salute. “Did an interview with Al Jazeera in downtown Portland this morning and man walks up and starts doing the Nazi salute behind me on camera,” he tweeted. “The interview was on the rise of hate and Free Speech.”

Portland Mayor Ted Wheeler last week tried to cancel Sunday’s right-wing rally, calling on federal officials to aid in pulling the group’s permit because he believed it would be destructive at a particularly difficult time. He wrote on Facebook that “our city is in mourning, our community’s anger is real.” His request was declined, drawing criticism from the American Civil Liberties Union of Oregon: “The government cannot revoke or deny a permit based on the viewpoint of the demonstrators. Period.”

Sunday’s rally – in an outdoor plaza sandwiched between City Hall and the jail where Christian is being held – provided a vivid illustration of the city’s divisions.

Protesters surrounded the plaza in the hours before the rally began. To the west, in front of City Hall, protesters chanted and displayed signs with such messages as “Wake Up Portland! Your city is racist!” and “Nazis? Never!” Steps away, dozens of local organizations took to a microphone at City Hall in a “Portland Stands Against Hate” rally.

“An attack on one of us is an attack on all of us,” Cari Luna, chair of the Portland chapter of Democratic Socialists of America, said in a statement Sunday morning. “We’re here now, we’re coming together, and we’re saying NO to racism, NO to bigotry. We want a world where every person is truly free, and we’re not going to let the last dinosaurs of the white colonialist patriarchy stand in our way.”

To the north, hundreds of black-clad, left-wing, anti-fascist protesters chanted, blared music and held paper-mache spiders and skeletons, which have become signature icons at Portland protests. Beyond them, a group of Buddhists sat in silent protest.

And to the south, labor union members clad in helmets and safety vests screamed: “Racists! Murderers! Fascists! Out of Portland!”

Between every block were thick lines of Portland police and Homeland Security officers clad in riot gear; they made several arrests. Portland police announced at about 3:30 p.m. that the antifa assembly was considered unlawful before deploying a volley of flash grenades into the crowd of counter-protesters, sending black-clad demonstrators running.

In the center of it all, at the rally, an assembly of right-wing groups including American Freedom M/C, Patriot Prayer, the III Percenters and Oath Keepers gathered, many of them vowing to defend free speech.

Patriot Prayer’s Joey Gibson, who has said his group tried to eject Christian from the April protest, brought a message of peace to Portland: “I want everybody here . . . to find it in yourself to make this day positive, with no hate and no violence,” he told the crowd. “We have to understand Portland is legitimately shaken up right now.”

He called on his supporters to “prove ’em wrong. … Hatred is a disease. We need to start spreading love to get rid of this hate.”