“Short term, I think it’s fair to say we really have not distinguished ourselves in a positive way by how we responded to the crisis when it was upon us,” Romney said in a video interview with the Sutherland Institute. “And the proof of the pudding of that is simply that we have 5 percent of the world’s population but 25 percent of the world’s deaths due to covid-19.

“And there’s no way to spin that in a positive light,” Romney added. 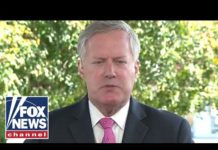