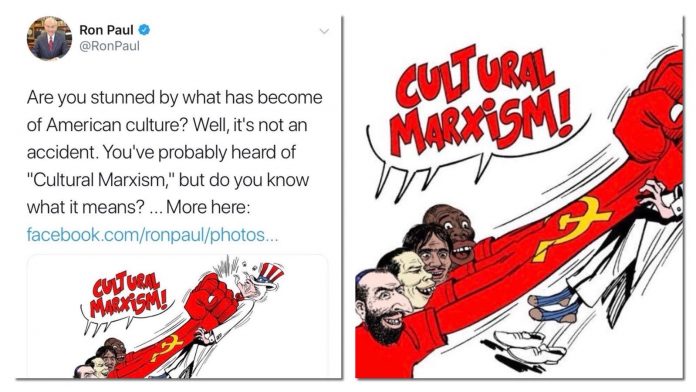 Former Rep. Ron Paul (R-TX) apologized today after his Twitter account posted and then deleted a racist and antisemitic cartoon featuring a Jewish man, an Asian man, a Latino man, and a black man all punching Uncle Sam with an arm emblazoned with the communist hammer-and-sickle symbol, the Daily Beast reports. The caption on Paul’s original tweet was “Are you stunned by what has become of American culture? Well, it’s not an accident. You’ve probably heard of ‘Cultural Marxism,’ but do you know what it means?”

Hours later, after screenshots of the deleted post went viral online, the libertarian 82-year-old ex-lawmaker issued a statement: “Earlier today a staff member inadvertently posted an offensive cartoon on my social media. I do not make my own social media posts and when I discovered the mistake it was immediately deleted.”