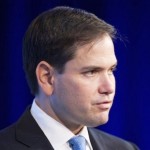 “I think, unfortunately, this is a president that I don’t fully understand a lot of the things he says or does,” the Florida senator said on the “Hannity” radio show on Wednesday. “He’s abroad the last couple days and has spent more time attacking Republicans than he has apparently attacking ISIS, rhetorically at least.”

Rubio called the president’s constant attacks on Republicans “petty.”
“I think yesterday he accused Republicans of serving as a recruitment tool for ISIS,” he said. “I mean, these are the kinds of things we come to expect of someone who focuses on the petty, always political, constantly looking to gain the upper hand in some political dispute in the United States domestically as opposed to focusing on his role as commander in chief.”

Rubio, who sits on the Senate Select Committee on Intelligence, said the White House knows it is impossible to perform thorough background checks on Syrian refugees seeking asylum in the U.S.

“There are forged passports, forged documents, there’s no database we can rely on, there’s no friendly government we can call for reliable information — it’s just not possible,” he said. “And they know this — their own people are telling them there is no way for us to reliably background check 10,000 people.”

“And if you get one or two of them wrong — it just takes one or two, and you’ve got a major problem — you’ve got well-trained ISIS fighters in the homeland,” he added.

Obama has promised to accept 10,000 refugees from Syria in the next fiscal year.

Republicans have opposed the president, pointing to the terrorist attack in France in which at least one assailant is suspected of entering the country posing as an immigrant.

A poll released by Bloomberg on Wednesday found that 53 percent of Americans are opposed to opening America’s borders to those fleeing Syria.