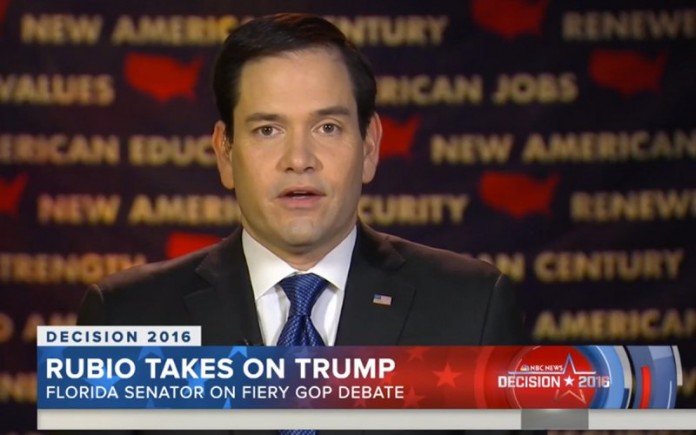 WEST MIAMI, Fla. – Years of carefully laid plans to repackage the Republican Party’s traditional ideas for a fast-changing country came crashing down here on Tuesday when Sen. Marco Rubio suspended his campaign for the presidency after a crippling defeat in his home-state primary.

Since Mitt Romney’s devastating loss in the 2012 presidential election, the Republican National Committee and leading voices at think tanks, editorial boards and Capitol Hill symposiums have charted a path back to the White House based on inclusive rhetoric and a focus on middle-class issues.

Nobody embodied that vision better than Rubio, a charismatic standard-bearer for conservative orthodoxy who readily embraced the proposals of the right’s elite thinkers. The senator from Florida spoke urgently and eloquently about raising stagnant wages and eradicating poverty. He had an immigrant’s tale to match the rhetoric. And on foreign affairs, he was a passionate defender of the GOP’s hawkish tilt.

But Rubio’s once-promising candidacy, as well as the conservative reform movement’s playbook, was spectacularly undone by Donald Trump and his defiant politics of economic and ethnic grievance. The drift toward visceral populism became an all-consuming rush, leaving Rubio and others unable to adjust.

“The party finds itself catching up to its base. Those very elegant papers it published and conferences it held may have been good and smart, but they didn’t really matter,” said William J. Bennett, a conservative talk-show host and former education secretary in Ronald Reagan’s administration. “Instead, everyone who’s been prominent for the last 15 to 20 years finds themselves getting pushed out.”

Rubio’s fall comes weeks after others who advocated for conservative reforms, such as former Florida governor Jeb Bush and New Jersey Gov. Chris Christie, have dropped out of the race, and as the donors and institutions who have long supported hawkish policies on fiscal and foreign policies find themselves scrambling to hold onto the consensus that has shaped the GOP for decades.

For many of them, Trump represents a threat to the traditional order of the party and its platform. He does not support overhauling Social Security – a key plank for Romney and GOP congressional leaders – and he was a vocal critic of the 2003 invasion of Iraq in its aftermath, setting him apart from much of the party’s high command.

Rubio, whose ascent was propelled by a network of powerful players for years, was supposed to be the candidate best positioned to stop Trump and prevent a Republican rupture.

“Rubio was ready and briefed on policy, that’s for sure, but I just think he never connected,” said former New York mayor Rudy Giuliani, who is friendly with Trump. “He sounded like someone who was trying to be a lot for a lot of people. That’s hard to do.”

Following Romney’s defeat in an election many Republicans thought they should have won, party leaders concluded that the only way to regain the presidency would be to engage the growing and diverse electorate that President Barack Obama had won over twice. The RNC drafted an “autopsy” that recommended bolstering appeals to women and minority voters, while reform conservatives drafted their own manifesto.

Rubio had been building his base among these Republicans since January 2011, when he began his Senate term. He joined the Senate Foreign Relations Committee and began to speak at think tanks and meet with scholars, most of them former staffers from George W. Bush’s administration. He hired a number of them for his own staff.

During his breaks in the Senate, Rubio would often tell colleagues how he was reading papers sent to him from former Republican officials or how he was about to have lunch with another bold-faced name from the Bush years. On his computer, he kept a “drop box” of related policy files compiled by his advisers.

Meanwhile, a group of writers and intellectuals on the right were frustrated and stewing about the GOP’s lack of outreach to working-class voters during Romney’s campaign. By 2013, they began to call themselves “reform conservatives” and sought to turn the party policy discussion away from its emphasis on small business and toward working men and women, as well as families, who were struggling.

As Rubio took the lead on immigration reform that year – a move that riled the hard right – he continued to bolster his relationships with reform conservatives who were unveiling plans for new child tax credits and revamped federal subsidies. He put out a book, “American Dreams: Restoring Economic Opportunity for Everyone.”

Rubio followed a similar path with foreign-policy hawks as they began to look for a favorite ahead of the 2016 contest: a flurry of meetings and op-ed articles and, most critically, solidarity on the issues as they bubbled up.

Although Rubio entered 2015 hobbled with parts of the GOP base because of immigration, he carried goodwill among those two constituencies that were driving the Republican establishment: the reformers and the hawks.

“The critique was there: The Republican Party was out of touch,” said Peter Wehner, a senior fellow at the Ethics and Public Policy Center and former George W. Bush speechwriter. “But the breakdown occurred because we got into a cycle where policy didn’t matter at all. Policy was not just secondary, but it was almost not even in the conversation. And when people tried to interject policy – whether it was Rubio or Bush or others – there was just no appetite for it. It didn’t catch on.”

“Rubio was prepared, much like Jeb Bush, for a reasonable dialogue in Washington policy language, offering positions that reflect 40 years of national security and foreign-policy experts. All of that disappeared. The market didn’t care,” Gingrich said.

Rubio’s hawkish foreign policy footing, thought to be an asset, was challenged. Trump’s claims of being “militaristic” even though he was inclined against intervention muddled how voters perceived the candidates, disassociating American power with the hawkish ideology of Rubio and the Bush orbit. Trump’s denunciations of George W. Bush’s decision to go into Iraq did not make the hawkish cause any easier.

“Trump has sounded hawkish without sounding graceful, and he’s expressed admiration for authoritarians. So it was a weird mix for all of the candidates,” said Kori Schake, a research fellow at the Hoover Institution who has advised Sen. John McCain, R-Ariz. “At the same time, Republicans are still wrestling with the legacies from the Bush administration . . . and I don’t think we’ve made peace on that.”

Ohio Gov. John Kasich, having won his home-state primary on Tuesday, could be someone whom Rubio’s coalition turns to next, although his maverick style has turned off some in the establishment. Still, he, too, holds hawkish views and has a compassionate pitch on domestic policy with a call to help people “living in the shadows.”

Stuart Stevens, who served as chief strategist to Romney’s 2012 campaign, chalked up Rubio’s troubles as a sign of a first-time presidential candidate still learning how to run nationally and inspire voters, rather than as a sign of the Republican Party cracking apart. In a year infused with anger, he said, Rubio failed to meet the moment with the policies he had spent years studying.

“Rubio had been told that he’s the future of the party. But it’s not enough to say, ‘I have a great future, vote for me,’ ” Stevens said. “You have to do more than use your biography. You’ve got to connect your ideas in a real way to the economy. . . . People ended up walking out of Rubio rallies misty-eyed and out of Trump rallies with blood in their eyes.”

Whit Ayres, Rubio’s pollster, spent the last several years compiling data and published a book showing that Republicans could not afford to alienate minority voters, especially Hispanics, if they ever hope to retake the White House. Watching Rubio’s concession speech on Tuesday night, Ayres was despondent.