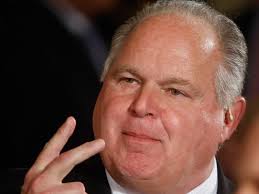 As President Obama continues his push to bring more Syrian refugees to America even in the aftermath of the Paris terror attacks by the Islamic State, talk-radio host Rush Limbaugh says the U.S. president is now a threat.

“I’m telling you Obama has become dangerous,” declared Limbaugh on his national broadcast Wednesday. “Where do you think the modern-day, 19- [or] 20-year-old terrorist comes from, Mr. President?”

“We can’t take the world here. There is no right to immigrate. We just can’t accept every human being suffering in this world in the United States.”

Like the reporting you see here? Sign up for free news alerts from WND.com, America’s independent news network.

Obama in the Philippines on Wednesday slammed Republicans who are pushing efforts to bar Syrian refugees from entering the U.S., calling their words offensive and insisting “it needs to stop.”

“Apparently they’re scared of widows and orphans coming into the United States of America as part of our tradition of compassion,” Obama said. “At first they were worried about the press being too tough on ‘em during debates. Now they’re worried about three-year-old orphans. That doesn’t sound very tough to me. They’ve been playing on fear in order to try to score political points or to advance their campaigns. And it’s irresponsible. And it’s contrary to who we are. And it needs to stop, because the world is watching.”

The president claimed tough-talking rhetoric from the GOP could be used as a recruitment tool by ISIS. He also indicated the American process for screening refugees for U.S. entry is strict, noting the nation doesn’t make good decisions “based on hysteria.”

“We are not well served when in response to a terrorist attack we descend into fear and panic,” Obama said.

Limbaugh, a staunch champion for the political right, defended the listeners of his program from Obama’s remarks, stating:

“You are not even close to what the president or the media or any of his other allies are attempting to accuse you of. There is precedent for every instinctive attitude you’ve got. Our instinct is right on the money with all this. We know this isn’t right. We know this isn’t sensible.”

“We are not a nation of racists, sexists, bigots, homophobes or what have you,”Limbaugh continued.

“As far as Barack Obama is concerned, you and me and every other Republican conservative is a bigger reprobate and a bigger threat than ISIS. And that, sadly, is not even arguable.”

The radio host explained, “Everything you’re watching … is political in nature and is being reported to you because of the political opportunity the issue has.”

If the Republicans win the White House in 2016, Limbaugh opined that the day after the election, “The media’s gonna say, ‘I wonder why the Democrats lost so big?’ And they’re gonna go back and maybe consider this.”