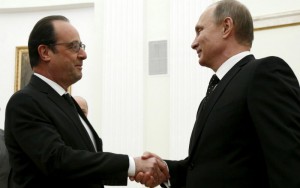 Russian President Vladimir Putin said Thursday that Moscow is ready to work with the U.S.-led coalition in the fight against ISIS. After meeting with French President François Hollande, the two leaders agreed to increasing intelligence sharing, ramping up airstrikes against ISIS in Syria, and working together to select targets.

However, Putin and Hollande continued to disagree on the role of Syrian President Bashar al-Assad.

Hollande contends that Assad has no place in Syria’s future, while Putin remains one of the embattled leader’s staunchest allies. Putin also rebuked the U.S. over the downing of a Russian warplane by the Turkish military near the Syrian border.

He said Russia would hold “serious consultations” with the U.S. over the incident, adding that Washington should have prevented its ally from shooting down the plane. Read more.